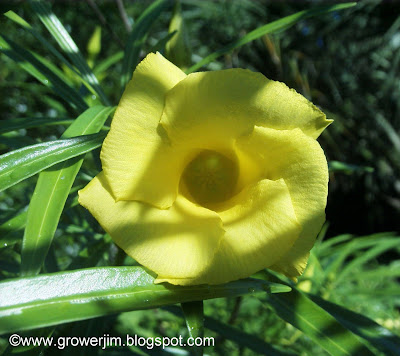 Thevetia peruviana is a large yellow-flowered shrub native to Central America.  It grows about 6 foot tall and wide, with a rounded to upright habit.  The two-inch yellow flowers unfurl from the ends of the new growth during warm months of the year.  Blooms are frequently visited by hummingbirds and butterflies, especially Gulf Fritillaries and Sulphurs. 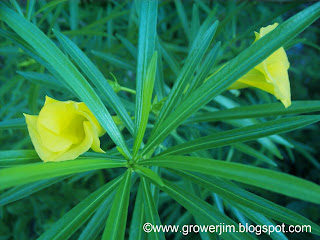 It is a member of the same plant family as Oleander (Apocynaceae) but belongs to a different genus.  The foliage and growth habit are similar to Oleander, but this species is not plagued by the Oleander caterpillar.  The plant is sometimes known as Yellow Oleander. 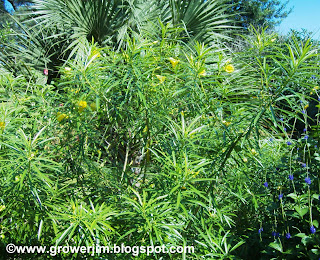 Thevetia is recommended for USDA Zones 9-11.  The plant is fairly cold-hardy and will withstand temperatures in the low 20° F  range for brief periods.  Last winter, temps in the mid 20's caused some twigs to die back but others were unaffected.
When flowers are pollinated, they develop a fleshy, green fruit. 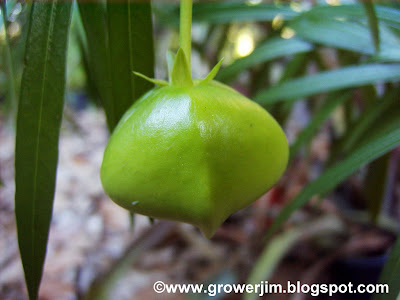 After turning black and falling to the ground, the fleshy part rots away leaving a dry nut containing two seeds. These nuts give the plant its other name of  "Lucky Nut". 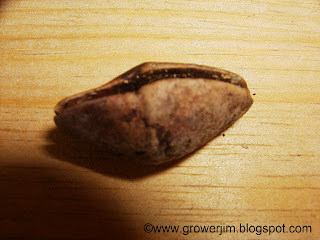 The 1.5 inch long nuts are sometimes strung together and used as body ornamentation.
Posted by Grower Jim

Niceplant. I grow Oleanders in pots. It can survive the winter outside only in costal area.

What an interesting plant, one I've not seen down here. Thanks for the photos and info.