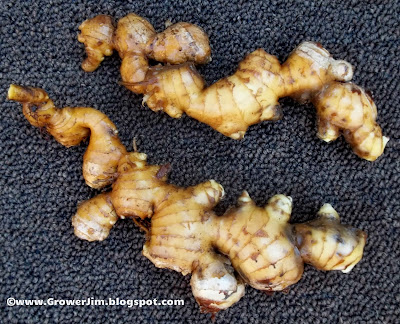 Ginger root (Zingiber officinale) has been one of the most widely used spices since ancient times. It has a variety of documented health benefits and is easy to grow as well.
The ginger "root" is actually a thick rhizome that grows right at the soil line and supports upright canes of leafy green foliage. The canes get 3-4 feet tall and the leaves are long and narrow, giving a bed of ginger a grassy appearance. 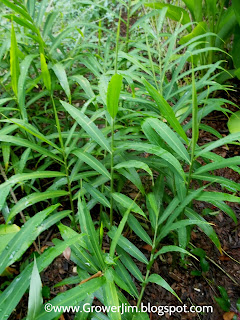 A long growing season is required to get a good harvest, and commercial ginger farms are usually in tropical regions with regular rainfall throughout the growing season.
Ginger can also be grown in containers, but the yield will generally not be as great as plants grown in the ground.
Late in the growth cycle, flower buds emerge from the rhizome and reach about 8 inches in height above the soil line. Small cream-colored flowers with a reddish-brown lip emerge from the bracts of the flower bud a few at a time over a period of a few weeks. Each flower is only open for a few hours in the morning, and the inflorescence is often hidden by the foliage. 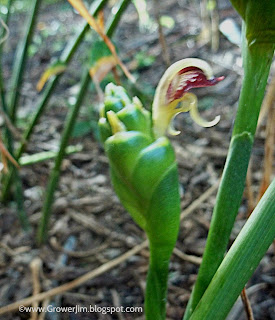 The rhizomes continue to increase in size and weight during the growing season. In the top photo you can see the progression in the size of the rhizome as it grows from left to right.
Late in the year the swelling rhizomes may even push up out of the soil as they grow. The ginger may be harvested at this stage and is sometimes marketed as "baby ginger". Because it is more tender and less fibrous, this is the stage in development used for pickled and candied ginger. 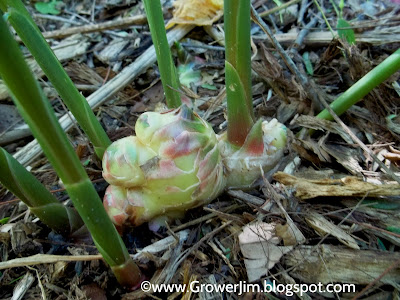 In late fall, the canes wither and dry up as the plants go dormant.  At this time the mature ginger is ready to harvest. Since the rhizomes are very near the surface, they are easy to dig. In loose soils, you can just brush away the dirt from the top of the rhizome and gently dig it up with a trowel or small shovel. Store it in a cool dry place until ready to use. Rhizomes left in the ground will sprout again in the spring and have a larger yield the following year. If you dig more than you can use immediately, you can freeze the excess harvest for later use.

Note that fresh ginger is light in color with only a thin skin, as seen in the top photo. It does not have the thick brown peel usually found on dried and imported ginger root, even though imported ginger is often marketed as "fresh". Newly harvested rhizome only needs a light scrubbing to make it ready for the kitchen, while dry imported ginger will have a tough fibrous skin that needs to be peeled before use.

Ginger root is used in the kitchen to flavor tea, cookies, cakes, and many other sweet or savory dishes. The fresh leaves can also be chopped and added to soups or stews for a milder ginger flavor.
Medicinally, ginger is used to treat nausea, headache, muscle and joint pain, and arthritis.

Zingiber officinale is native to Southeast Asia and is recommended for USDA Zones 8-12. It is propagated by planting pieces of the rhizome about 1 inch deep at the start of the growing season. 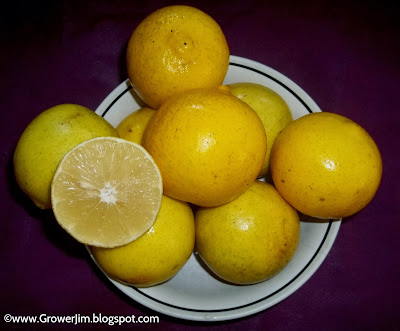 Sweet lemon (Citrus limetta) is an acid-free or low-acid variety of citrus. The same species is also sometimes known as sweet lime.

On the outside they are a typical lemon-yellow color. The flesh inside is pale yellow-green to nearly colorless.

They taste like a very mild lemon, without the acid bite.They are popular in Asia and the Middle-East, but somewhat difficult to find in the U.S. If you see them in a local market, buy some and try them.

Sweet lemon sections can be eaten whole, like an orange. They can also be juiced and drank plain or diluted with ice water for a refreshing beverage.
Sweet lemon trees grow similar in size and shape to other lemons, reaching about 12 feet tall and wide.

Like other citrus, the trunks and branches have long thorns. 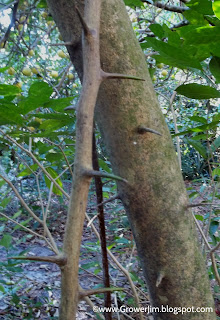 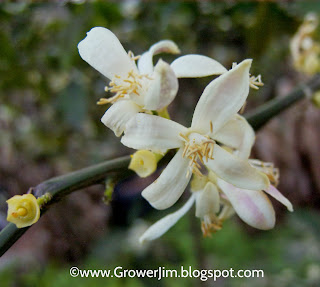 The fruit grows to about 3 inches in diameter and starts to ripen in late fall. The harvest continues throughout the winter. They are very prolific, but mature fruits hold well on the tree for several months so you only need to pick them as you need them. 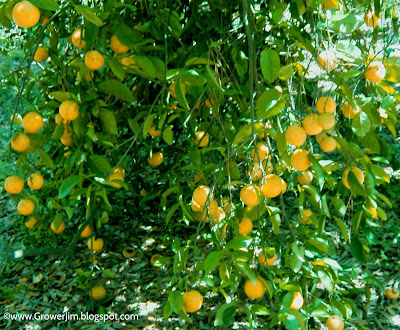 Citrus limetta is native to Southeast Asia, and will grow in just about any region where other citrus trees are grown. This is approximately USDA Zones 9-11. 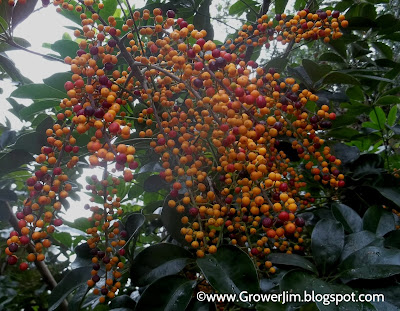 Schefflera arboricola (shef-LEER-uh ar-bor-ih-KOLE-uh) is a widely-grown houseplant that is also a durable landscape plant in tropical and sub-tropical regions. It is sometimes known as dwarf schefflera or Hawaiian schefflera. The palmately-compound leaves are glossy and dark green, with a diameter of about 6-8 inches. 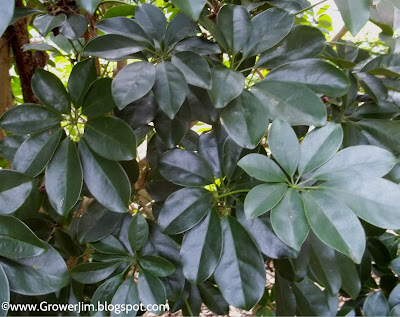 Stems are thick and sturdy. On lower portions of the plant they often send out aerial roots that thicken after reaching the soil to become prop roots. 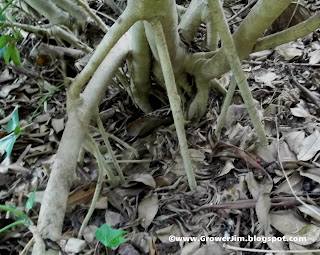 Plants can grow up to 15 feet tall and wide, but are easily trimmed to any size or shape desired. In late summer there are greenish, almost inconspicuous flowers on the ends of the branches. 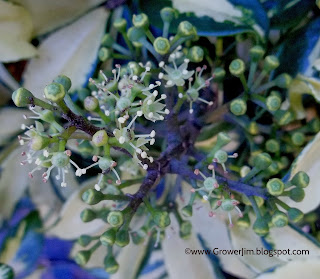 These develop into round berries that turn a showy orange-red in the fall, giving the plant great seasonal appeal. 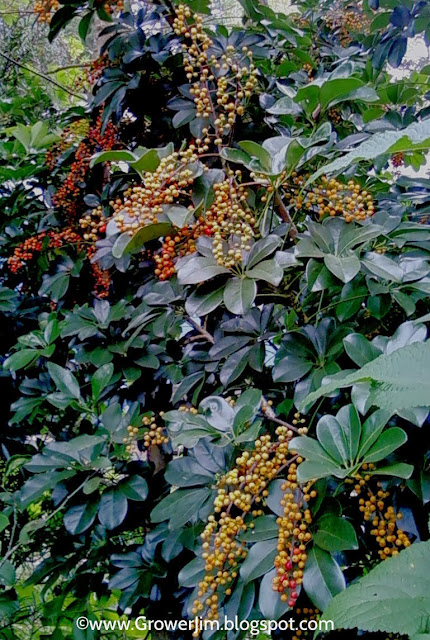 Schefflera arboricola is native to Southeast Asia and is very drought-tolerant once established.
It is recommended for USDA Zones 9B to 11, in exposures ranging from full sun to deep shade,
and can be grown anywhere as a container plant or houseplant. This species is easily propagated by stem cuttings or seeds.
There are many different cultivars available including this one with variegated leaves. 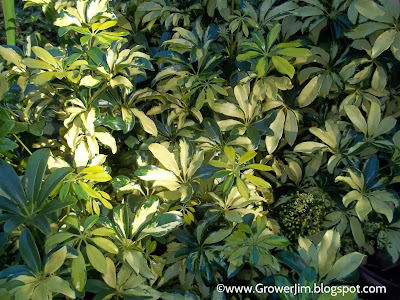