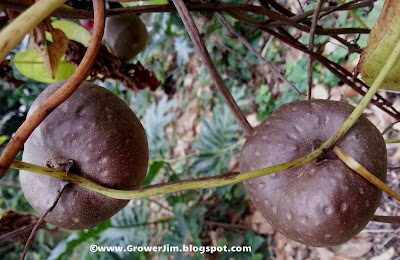 The information contained in this post is entirely about the edible cultivated varieties of Dioscorea bulbifera. The wild air potatoes you find growing in the woods are NOT edible.

This is one of the true yams that are tropical in origin. Yams are twining vines that quickly climb to the top of any available support. They can completely cover nearby trees or shrubs so plant it in an appropriate location.

While the plant is in active growth it will put out aerial tubers at many of the leaf joints. These aerial tubers are peeled and boiled as a vegetable.

The aerial tubers will grow where they fall on the ground, so pick them up and eat them if you don't want more vines taking over your garden!

Dioscorea bulbifera will produce well in sun or light shade. The plants are very drought-tolerant once established. They are perennial in regions where the ground soil doesn't freeze during the winter. In colder locations they can be grown as an annual, saving some of the aerial tubers for replanting each year.

There are a few different cultivated varieties in circulation;

'Hawaii' has dark, rounded tubers with a bumpy skin and glossy sheen. 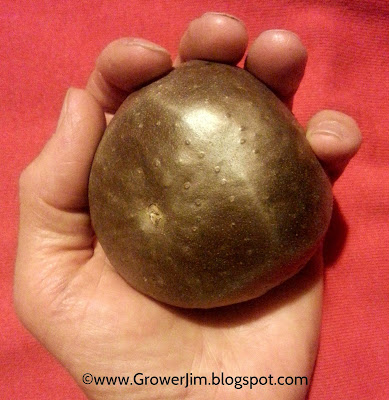 'Africa' has gray, angular tubers with a rougher texture. 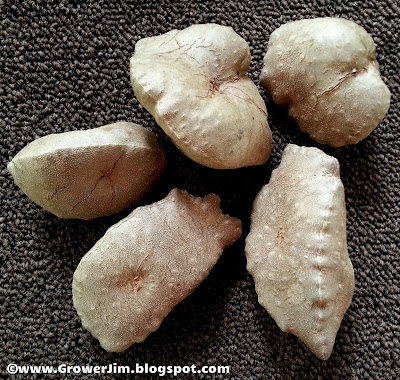 Dioscorea bulbifera is considered an invasive species in Florida and some other southern states, but the agricultural laws do not differentiate between the wild air potatoes and these cultivated edible varieties. Here is a photo of the wild variety for comparison: 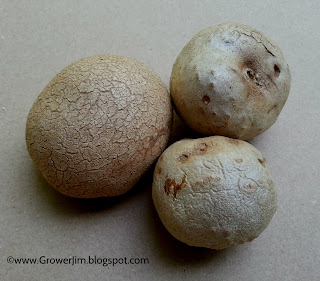 In an effort to keep wild air potatoes under control, Florida has introduced an invasive beetle from China to eat the leaves and aerial tubers. 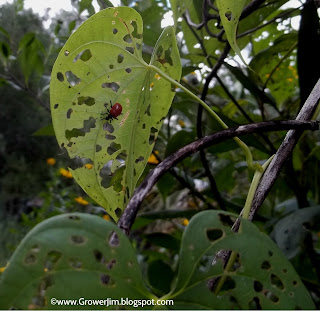 This initially seemed to have an effect since the leaves quickly became riddled with holes by the feeding beetles, but the air potatoes have sprouted again every spring with no apparent decrease in vigor. In addition, the beetles appear to be parasitized by some other insect which reduces the beetle population.
The beetles feed on both the wild air potatoes and the edible cultivated varieties. They have also been found feeding on other species of plants. Here's one feeding on Quisqualis indica: 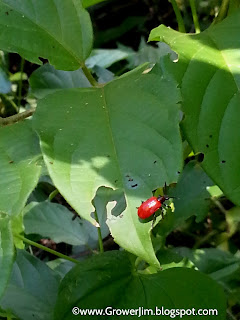 This may yet prove to be another example of an intentionally imported species having unforeseen consequences in its new environment.
Posted by Grower Jim No comments: