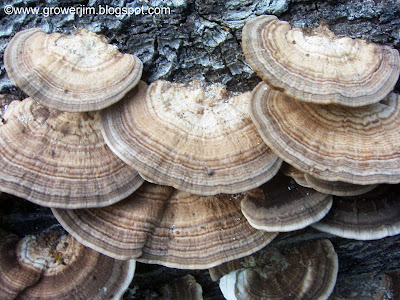 This month's art is the Turkey Tail fungus (Trametes versicolor).  This is one of the most common types of fungus found in temperate zones around the world, and primarily grows on dead hardwood trees.  In North America it is found on more than 70 genera of trees.
Trametes uses enzymes to break down the cell walls of dead wood, feeding on the lignin contained therein.  The contrasting color zones are typical of this species.
Mother Nature's Artistry is a monthly feature on this blog.  Check back again next month to see what Mother Nature has been up to!
Posted by Grower Jim 4 comments:

I try to keep detailed records each year about what survives during cold snaps and at what temperature.  This helps tremendously in subsequent years by letting me know what to protect if the temperature is supposed to drop to 30°F, which is an entirely different event than if the forecast is for 26°F.  Even so, after record lows early in December this year, and two consecutive nights at 26°, I was surprised by a few plants that weren't damaged even though I did nothing to protect them.
Schefflera is a large-leafed tropical that is usually hard-hit by freezing conditions.  A few of the stalks have turned black but many are still looking great. 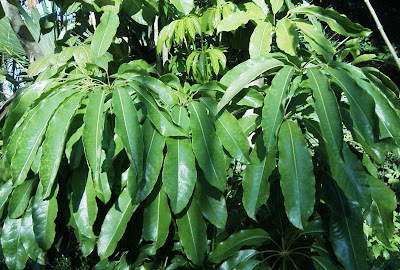 .
Jacaranda usually defoliates during freezing temps but for now the fern-like leaves are still soaking up the sun. 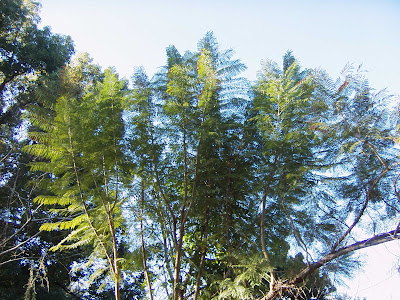 My Mango tree was a pleasant surprise.  Just a few leaves at the top show a little brown.  I didn't get any fruit this year because of the hard freezes in January 2010, and I know winter is just starting, but I'm hoping  that the rest of the winter won't get any colder than we've already had. 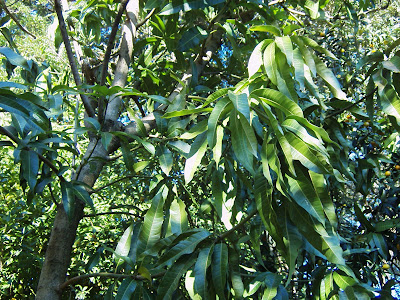 The most amazing survivors are these Papaya seedlings.  They're under the canopy of a shade tree but otherwise got no protection from the 26° nights. 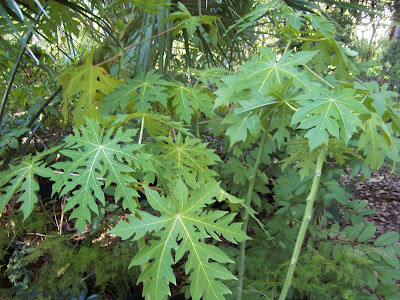 My 12-year-old Papaya out in the open just had the upper leaves nipped by frost and is still loaded with fruit.

There are lots of factors other than the low temperature that determine how much damage a freeze will cause.  Whether frost settles on the leaves makes a huge difference.  Wind speed and duration of the freezing temperatures can also mean the difference between life and death for tropical plants.  Still, some plants have shown they'll survive temps far below what you might expect!
Posted by Grower Jim 7 comments: 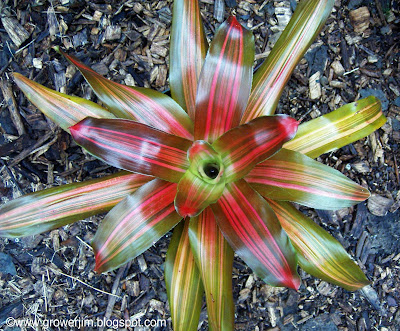 Neoregelia 'Orange Crush' is one of the types that develop good foliage color even when not in bloom.  The young offsets have green and white variegation but as soon as the leaves start to spread, they develop a red-orange blush on the leaves.  When ready to bloom, the center of the plant becomes solid red.  Coloration will be best in bright light, with protection from intense sun.  Mine get early morning sun, and then dappled shade from mid-day on. 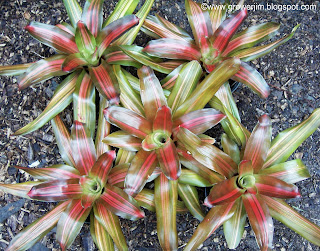 Plants get about 12 inches across and eight inches tall.  Like many Neos, they will tolerate a light freeze but need to be protected from frost forming on the leaves.
Buy this plant!
Posted by Grower Jim 7 comments: Aechmea gamosepala is a small-growing species, with individual plants usually staying less than one foot tall and wide.  Flowering of plants occurs simultaneously in late fall and may extend into early winter.

Plants multiply rapidly and quickly form large clumps when planted in the ground. 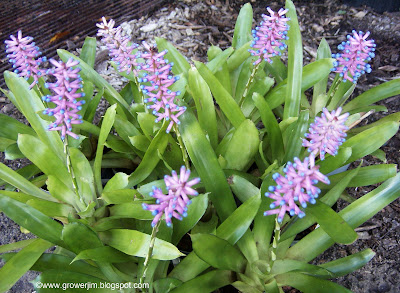 The inflorescence gradually turns dark pink and retains color for about two months. 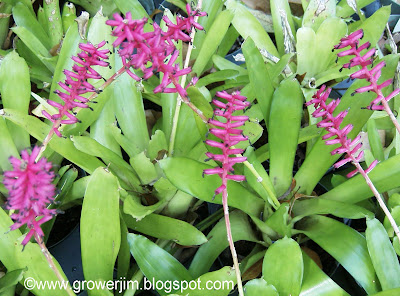 If kept in containers, they are quite comfortable in a five-inch pot. 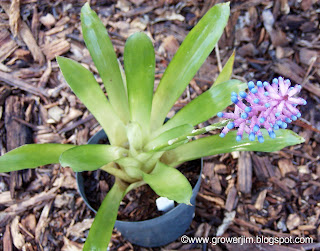 Most of the time I harvest fruit as I'm ready to eat it, so this month I'm showing the harvest as it looks while still in the garden.  To see what other gardeners are harvesting, see Daphne's Dandelions blog. 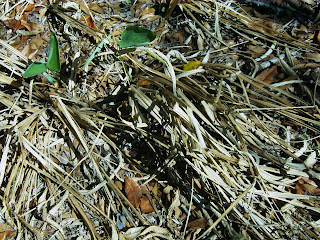 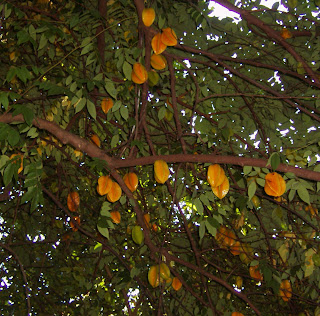 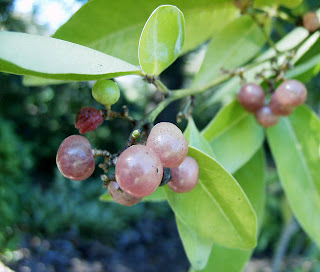 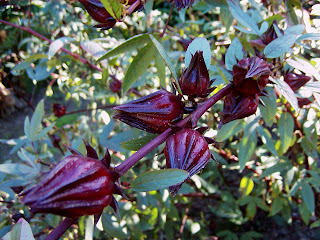 Email ThisBlogThis!Share to TwitterShare to FacebookShare to Pinterest
Labels: Harvest

At some point or another, nearly every gardener has done battle with snails and slugs. What many don't know is that some snails are beneficial and actually eat the snails and slugs that do damage. In Florida, there are five species of predatory snails. The most common of these is the Rosy Predator Snail (Euglandina rosea). This is a fairly large snail, growing up to 2 ½ inches in length. It is easily identified by the glossy, elongated shell and the rosy or brownish-pink coloration.

The Rosy Predator Snail (also known as the Rosy Wolf Snail) is widespread in Florida, but is also found in Georgia, South Carolina, Alabama, Mississippi, Louisiana, and Southeastern Texas.

The snail lives for up to two years, and one study showed that a single individual can consume more than 350 damaging snails in its lifetime. The Rosy Predator follows the slime trails of its prey in order to find its next meal. Small snails are eaten whole and larger snails are eaten live, right in the shell. Here's an adult feeding on a bush snail. 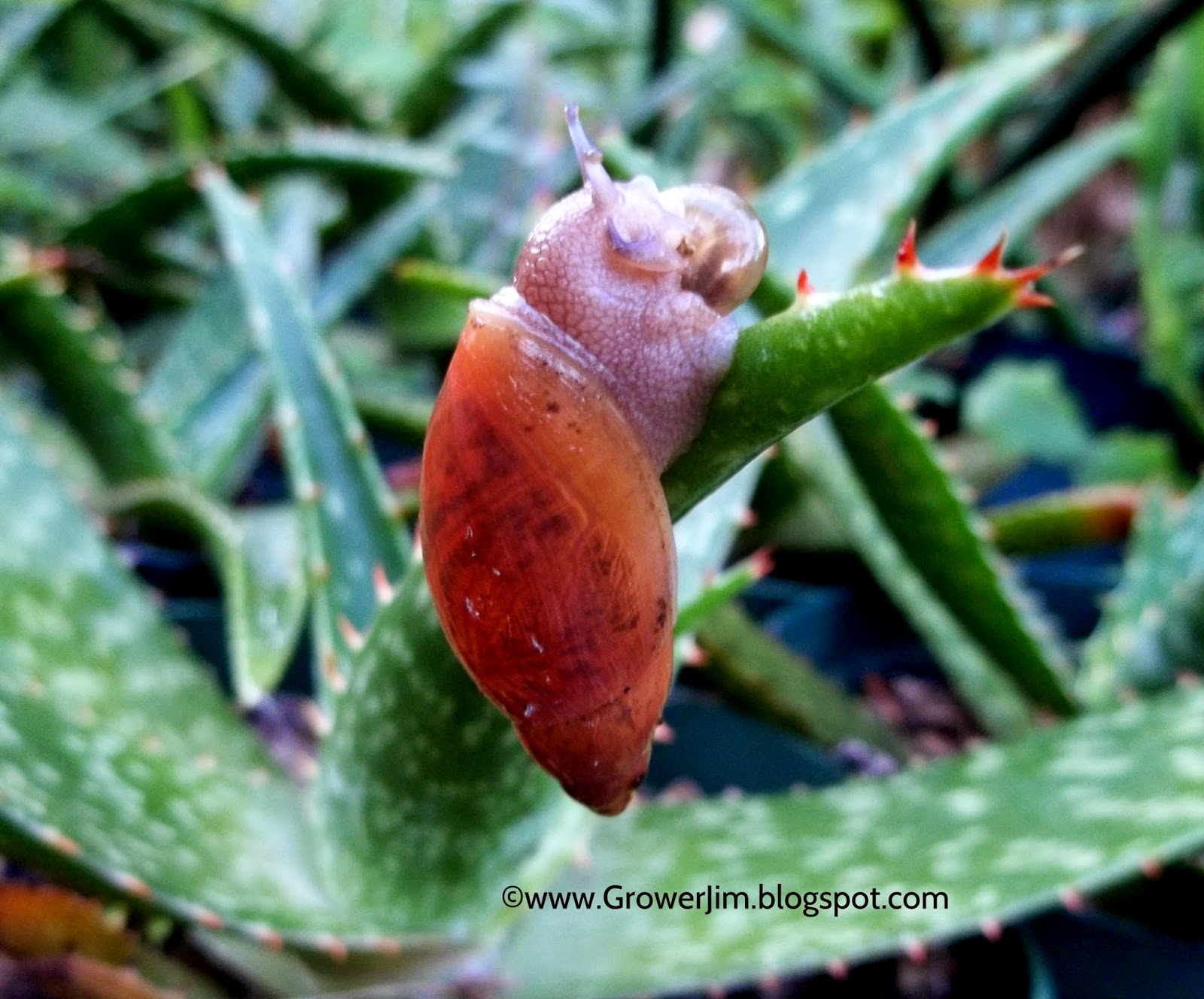 When the predators reach sexual maturity they search out a mate. Snails are hermaphroditic so both partners of a successful mating will be pregnant. 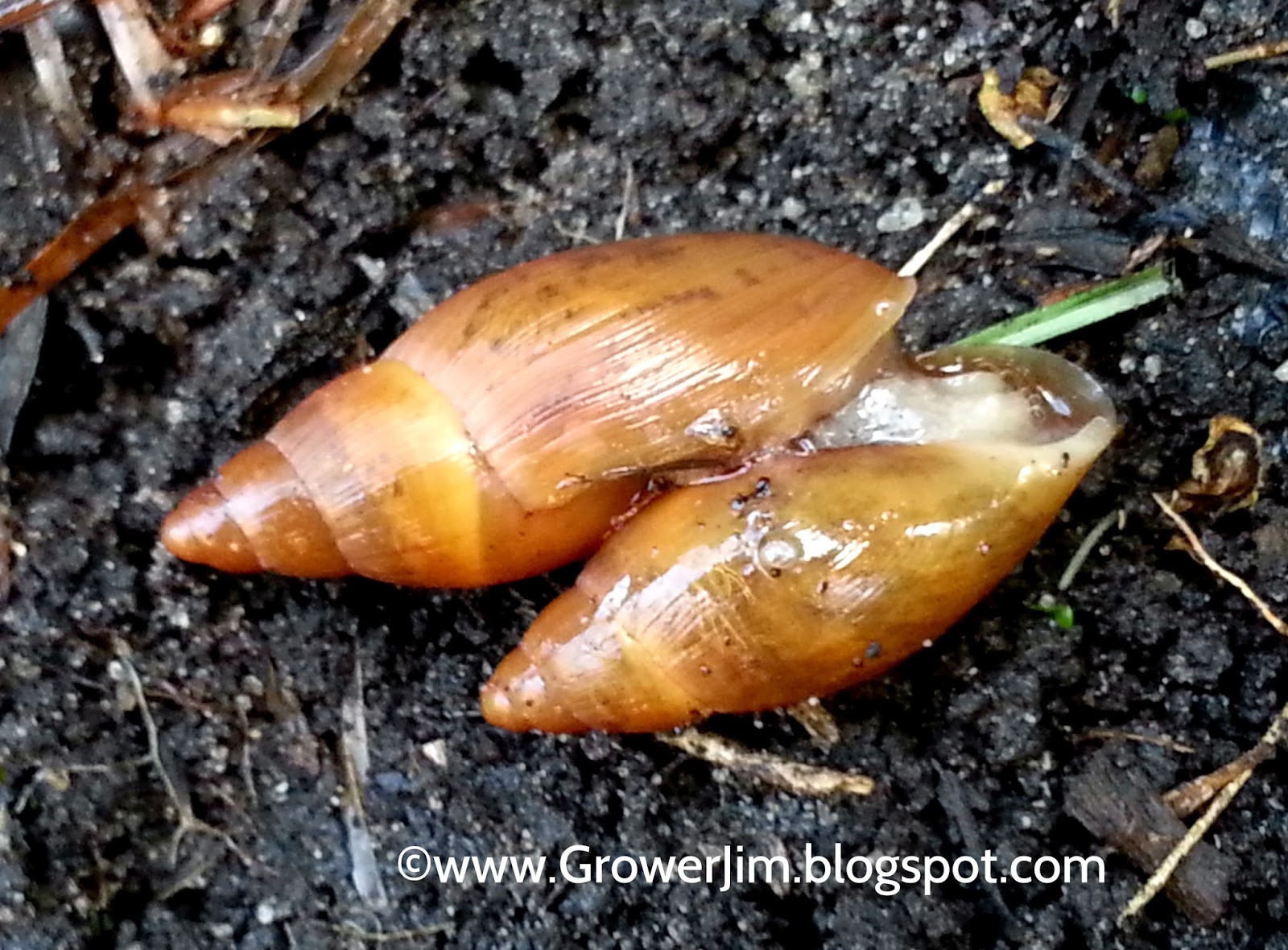 Approximately thirty eggs are laid at a time in the soil and these hatch in about a month. 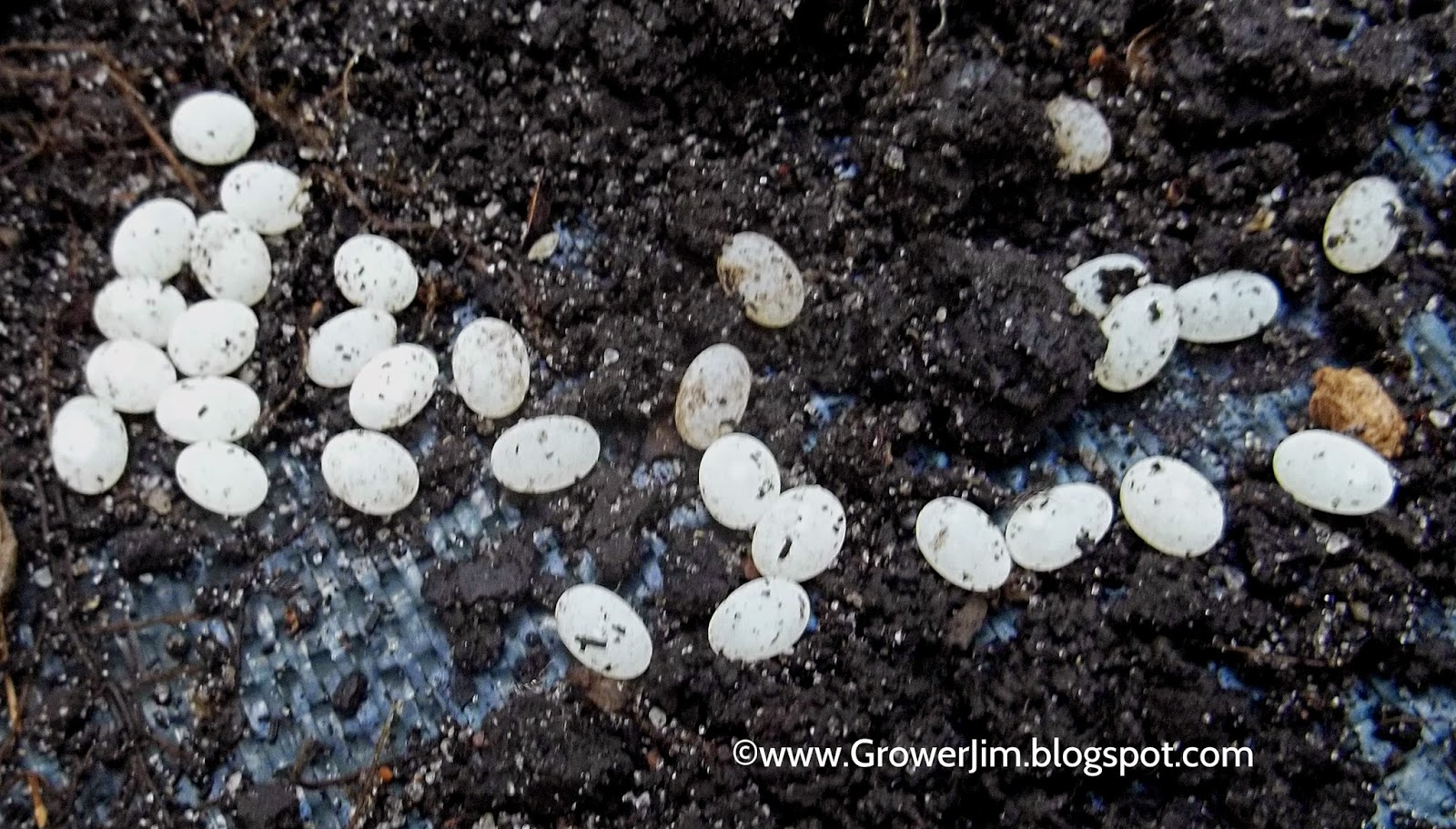 They immediately begin exploring their territory and looking for prey. 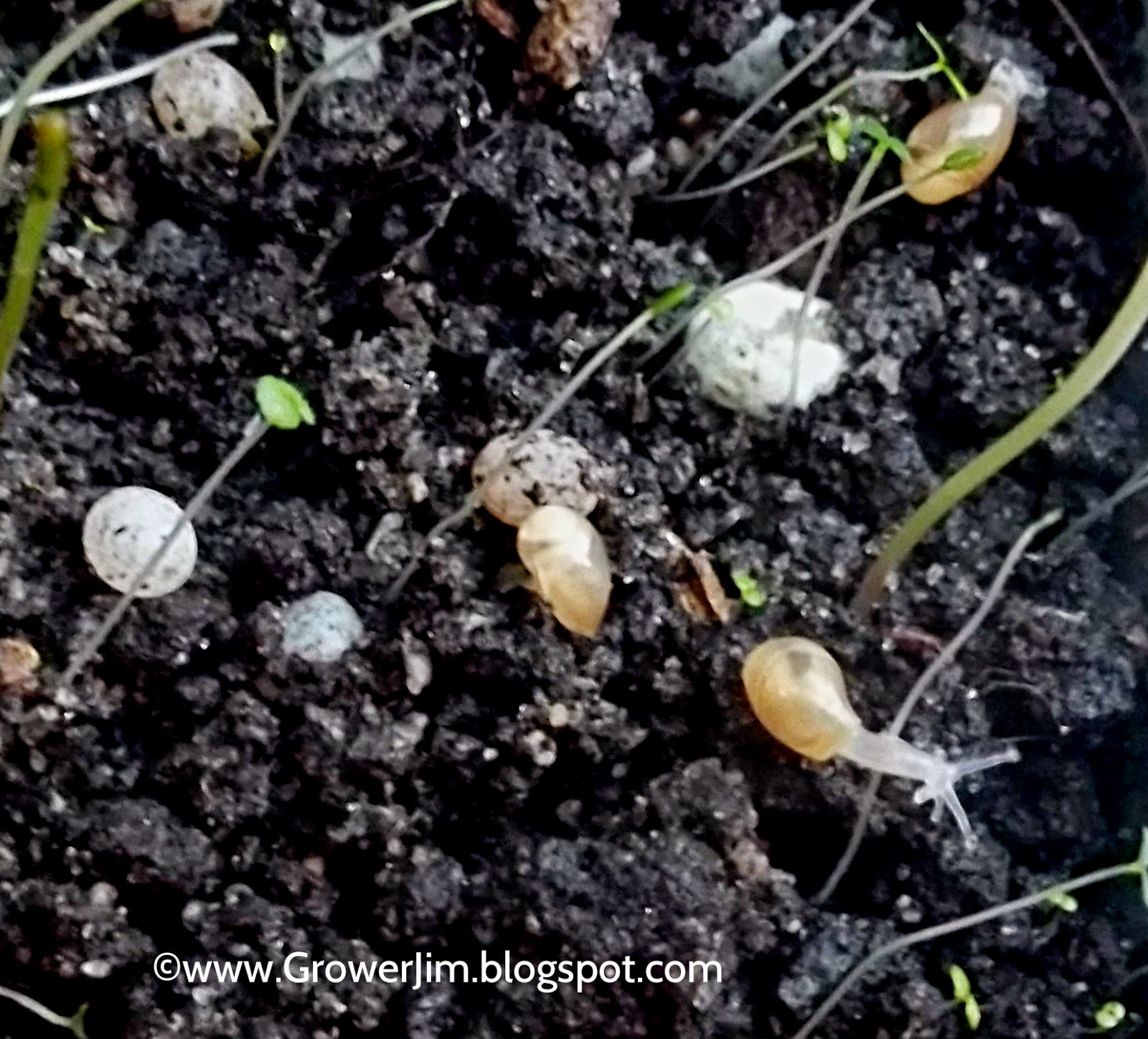 Here's a baby predator feeding on a bush snail. 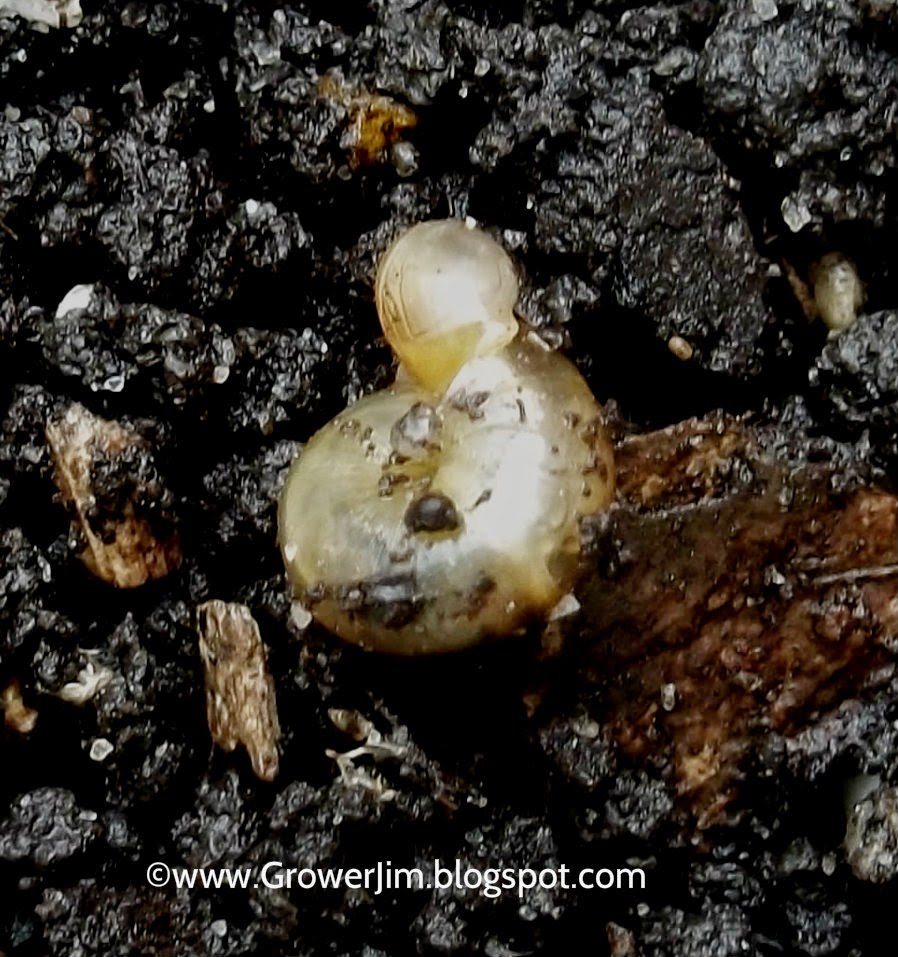 Newborn rosy predators are usually pale, but the shells develop more coloration as the snail grows.
In 1955, Euglandina rosea was sent to Hawaii in an attempt to control the invasive Giant African Snail. The newest inhabitants reproduced quickly, and within three years 12,000 Rosy Predators were collected to send to other tropical regions, including New Guinea, Okinawa, and the Philippines. Like most attempts to introduce predatory species into a new environment, this one ended in disaster. The Rosy Predator preferred to feed on the colorful native Hawaiian tree snails, eventually eating several species to extinction.

In areas where the Rosy Predator snail is native, it is a very beneficial creature to have living in your landscape. Gardeners can often find empty shells of the destructive Bush Snail where the Rosy Predator has been feeding.
Be on the lookout for this “good snail” and make it welcome in your garden!
Posted by Grower Jim 9 comments:

This is my monthly report of all the small things taking place in the garden.  Click on the links to see a complete plant profile.  The citrus trees have all developed good color and the limbs are hanging heavy with fruit.
I have a stalk of Dwf. Cavendish bananas starting to ripen, and one late Pomegranate fruit that is starting to show color.  The Jaboticaba trees have been blooming and should be ready to pick by Christmas.  White Sapote is just starting to bloom and should continue throughout the winter.  Loquats are filling the air with the spicy fragrance of their flowers.
Sugarberry trees are nearly bare already and the Pecan is just starting to turn a little yellow.  The Ceiba trees have lost most of their leaves and the last of the flowers are blooming high up in the top of the tree. 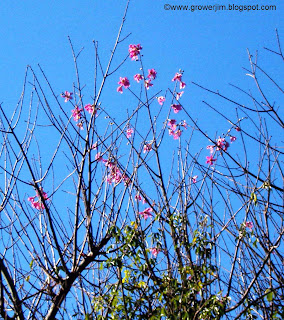 Short-day flowering plants like Camellias and Kalanchoe are full of buds and should be blooming by the end of the month.  The Marble Poinsettia bracts are also starting to show some color and will become more beautiful with each passing day. 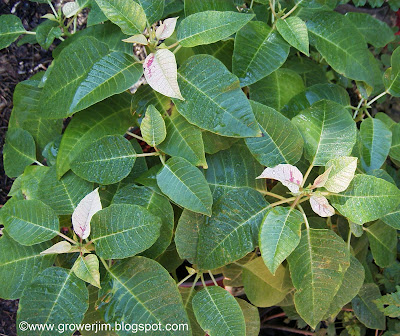 That's all for today!  Check back again next month to see What's New in my garden!
Posted by Grower Jim 5 comments: