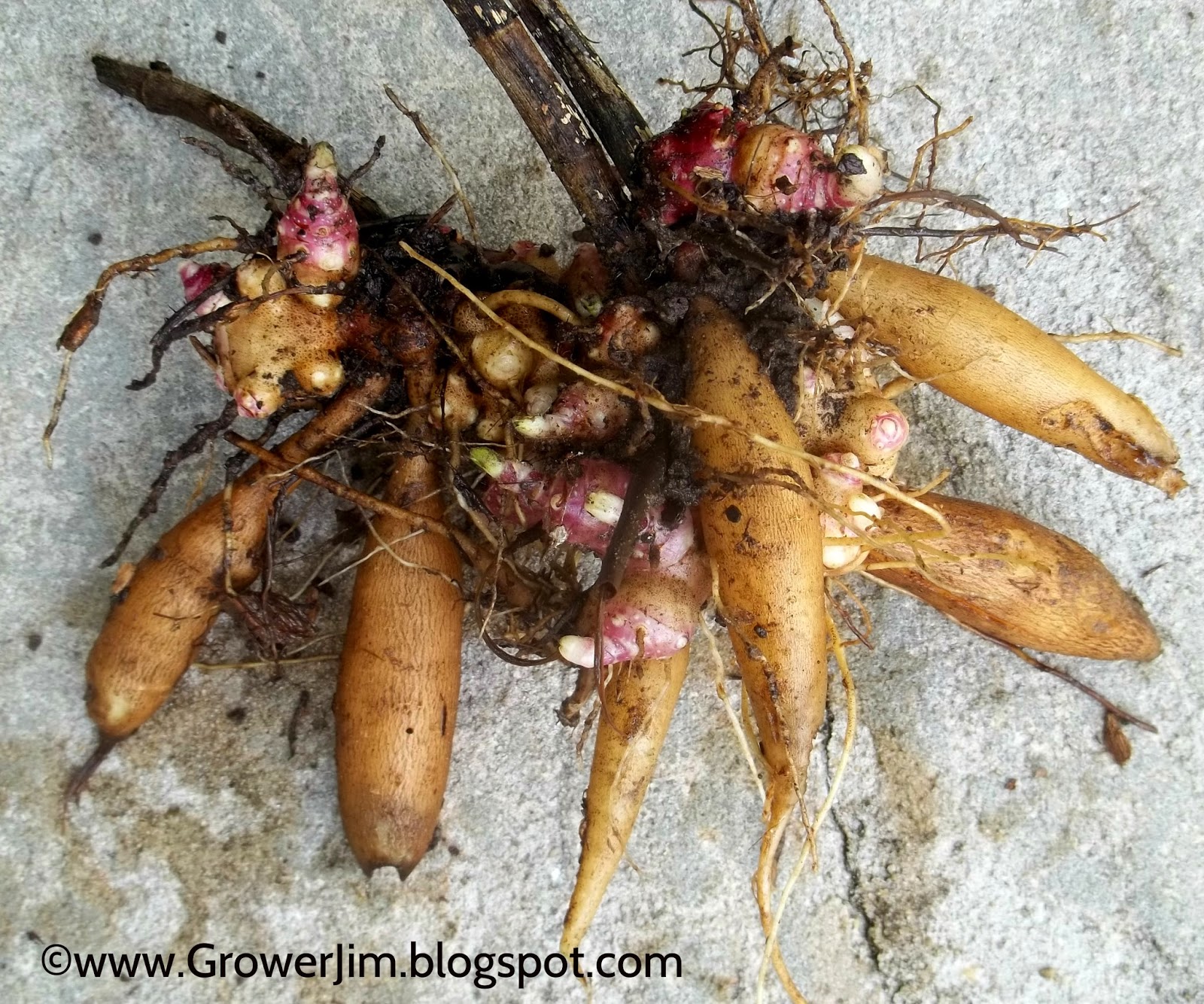 Yacon (Smallanthus sonchifolius) is a perennial root crop that tastes like a fruit. People in the Andes region of South America have cultivated and enjoyed it for more than a thousand years. Only now are scientists discovering its many health benefits, and commercially-produced yacon syrup is becoming widely available.

It grows multiple stems 6 feet or more in length from a densely-clustered rhizome. When they get too tall they tend to lean over and curve upright again. Stems touching the soil are able to root and start a new growing point, and new shoots may sprout from the rhizome. 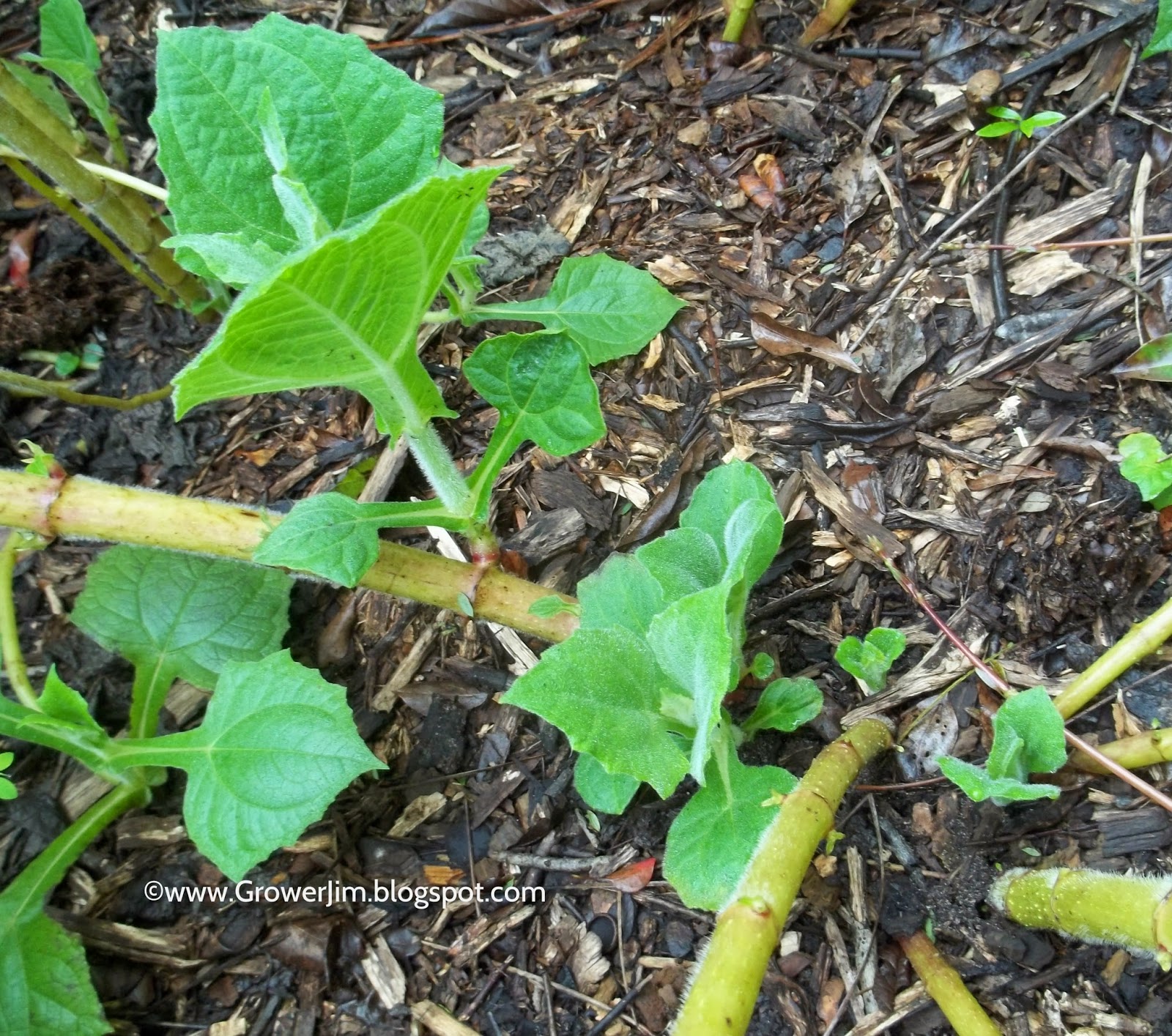 The large fuzzy leaves grow opposite on the stem and can reach more than a foot in length. They have a distinctive winged petiole. 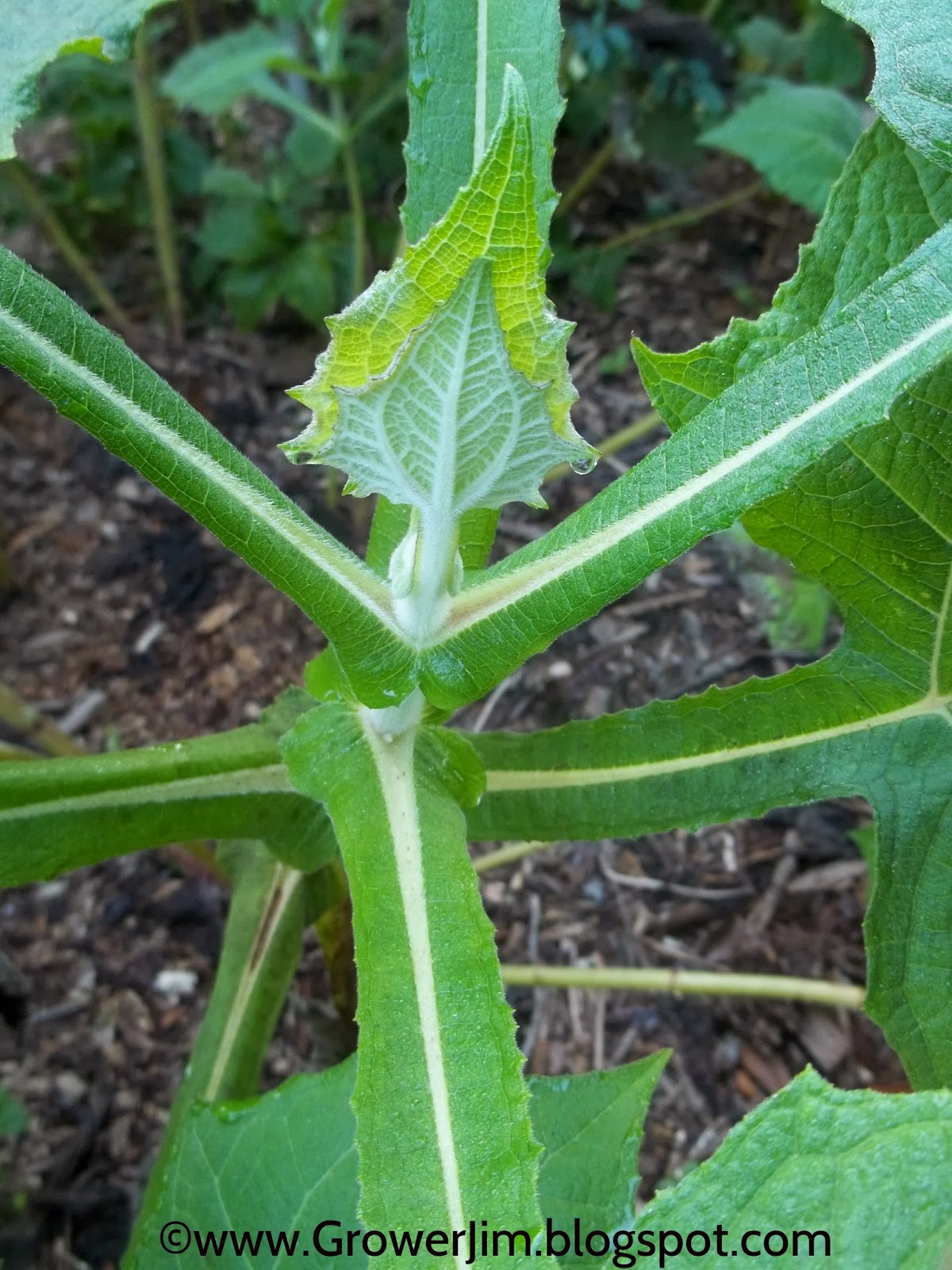 Yacon leaves may be used to wrap food when cooking, or dried and made into a tea. The leaves and stems are cooked like a vegetable, but I find they have a somewhat unpleasant resinous tang. 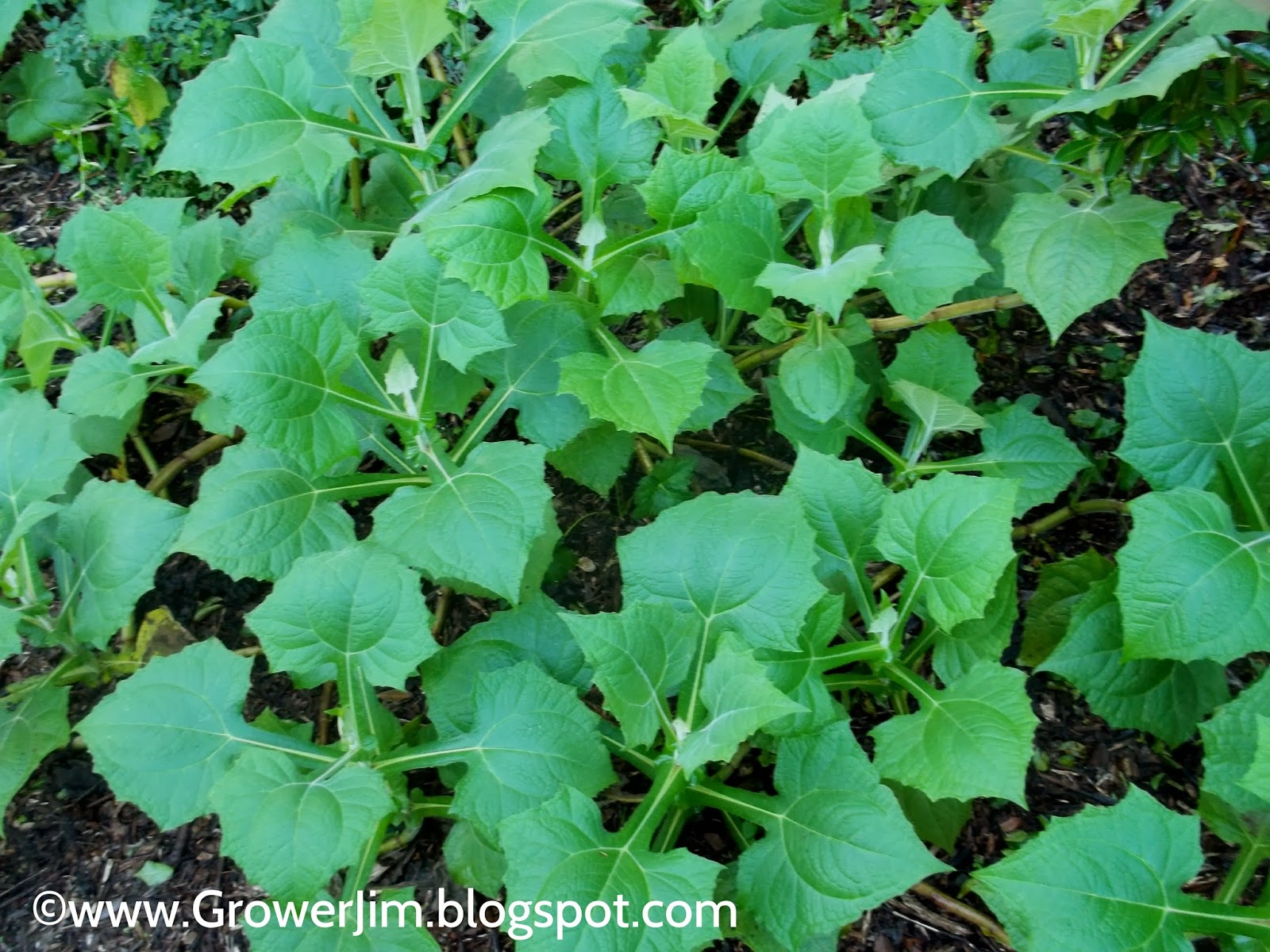 Yacon is in the Asteraceae family and in late summer small sunflower-like blooms appear on the tops of the stems. 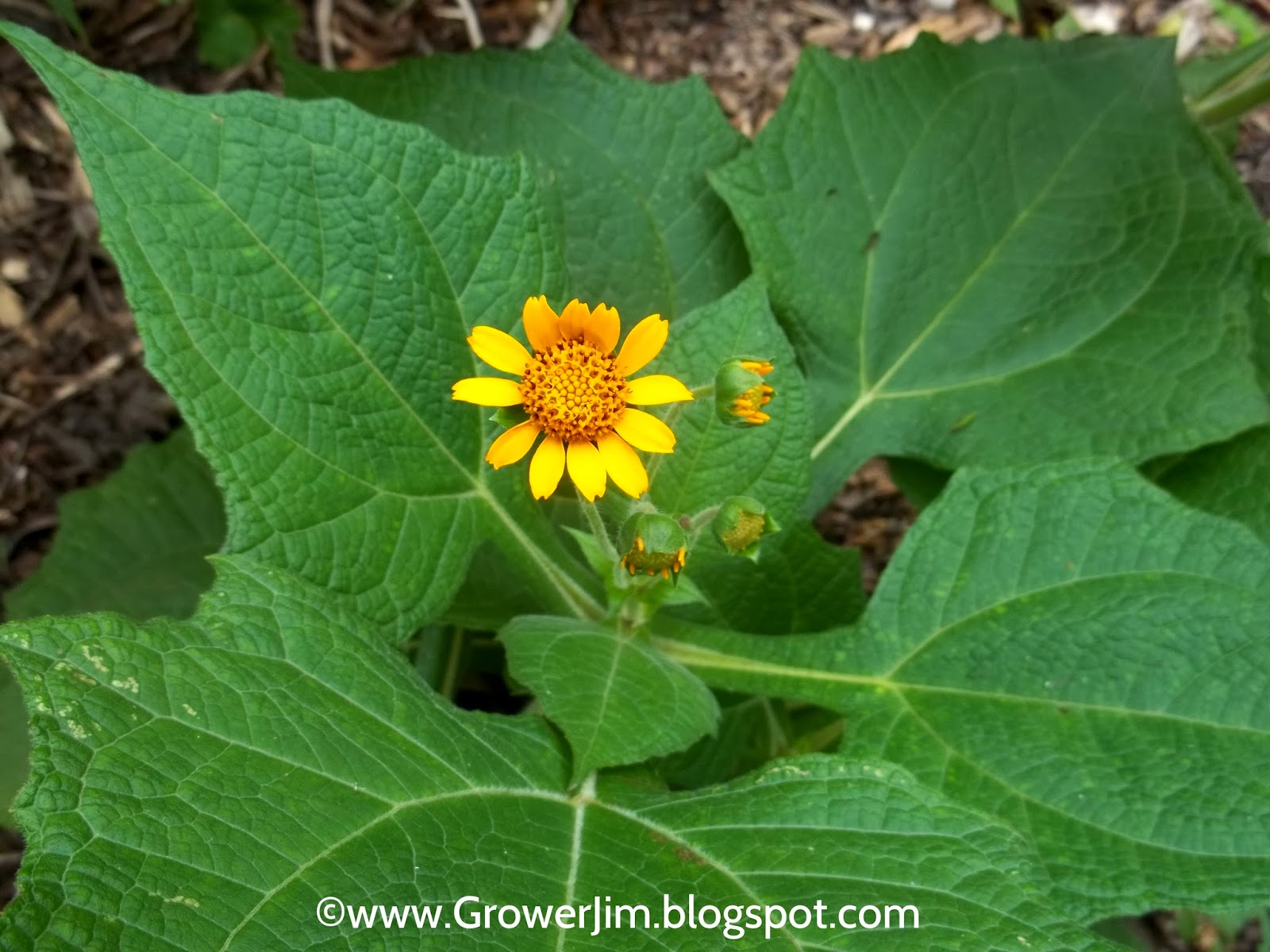 It is during this time that yacon starts to grow its storage roots -- the most prized part of the plant. As the autumn days get shorter and cooler, the foliage starts to decline and the roots increase in size. The rhizomes also multiply rapidly during this time and start to push up out of the soil. 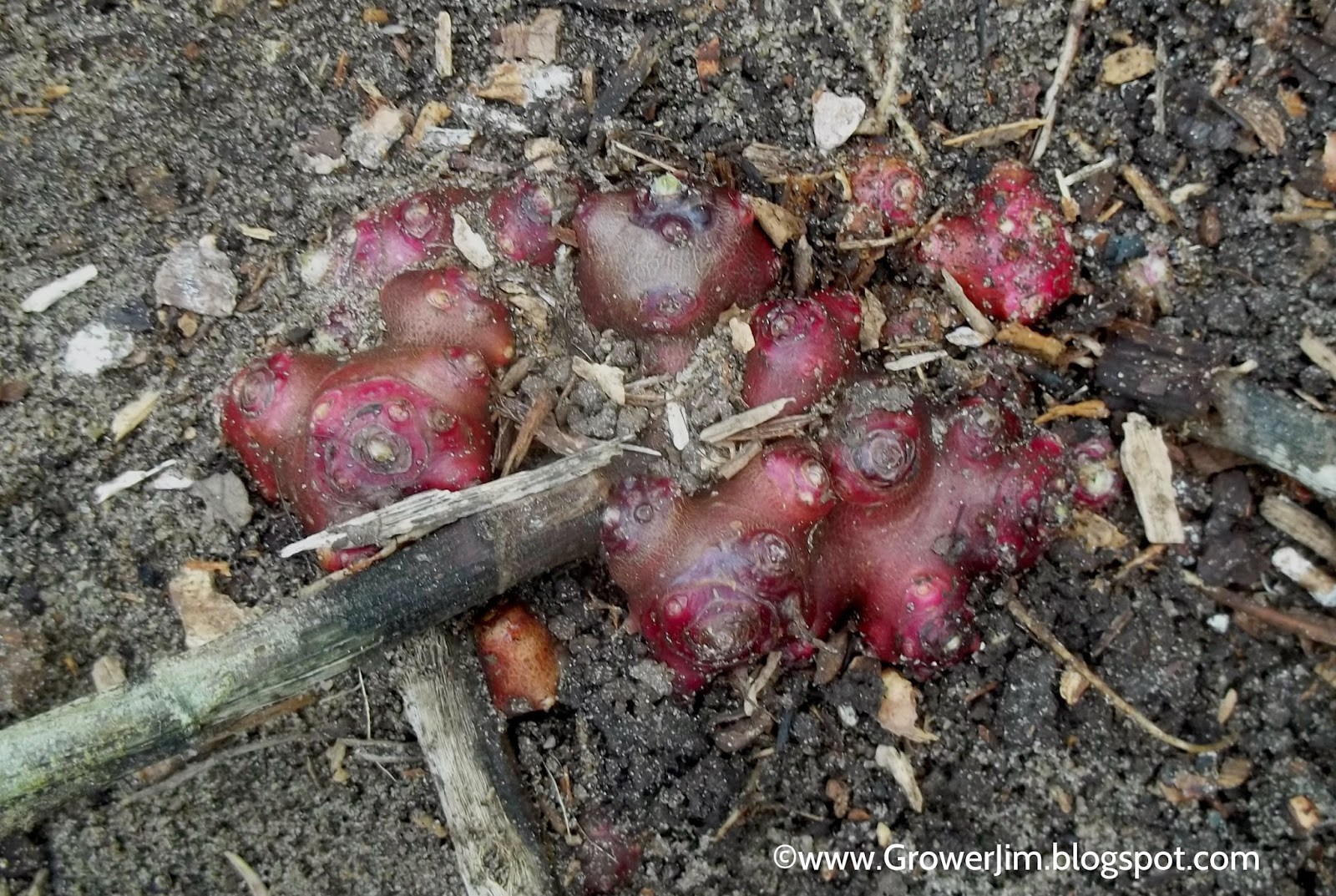 In frost-free regions, dormancy may be induced by the onset of the dry season.

I allow the plant to go completely dormant and then carefully dig around the clump and lift it up. Several of the thick storage roots will be radiating out from the clump of rhizomes. These are easily snapped off for eating, and the rhizomes can be set back in the ground or divided and replanted in multiple locations. Roots average around half a pound each, but reportedly can weigh up to 5 pounds. 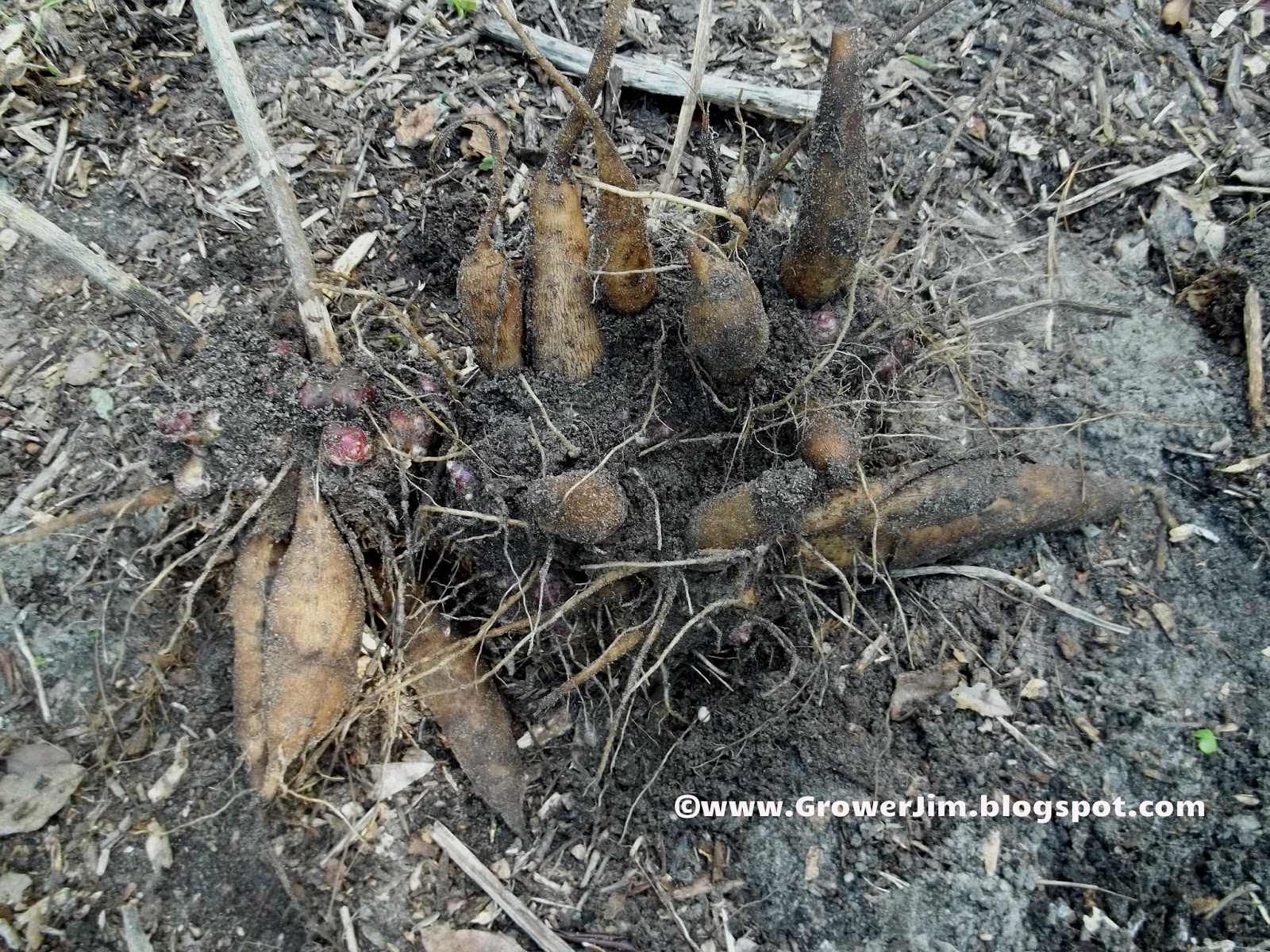 The first year I grew this crop, I started with about a dozen rhizome pieces smaller than my thumb. From that, I harvested about 7 pounds of edible root. I expect I will get a much larger harvest the second year when starting with much larger rhizomes. 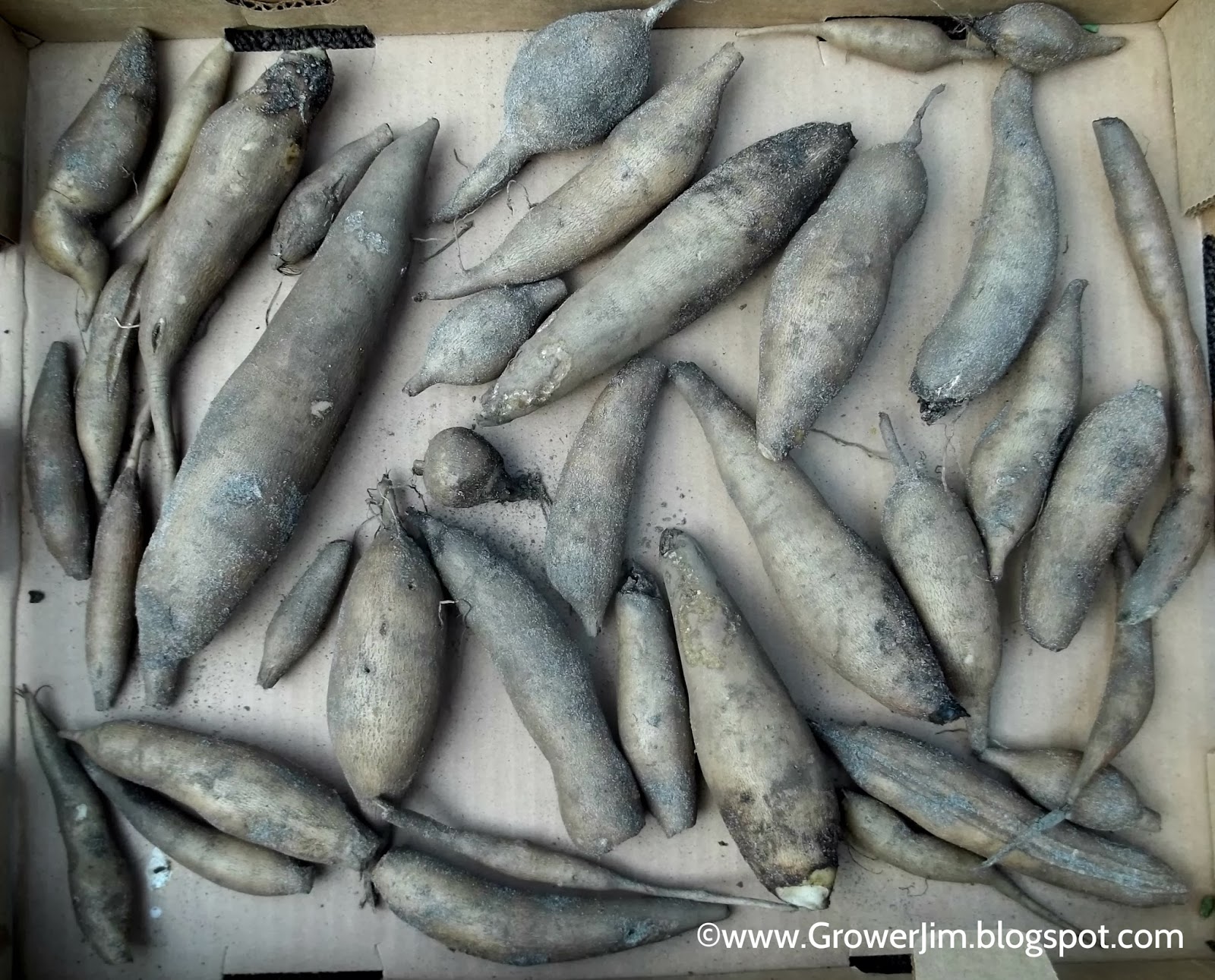 Yacon root is sweet, juicy and crunchy with a pleasant apple/pear/watermelon flavor and texture. When first dug, the skin is very thin and pale. As the roots are exposed to the air over a few hours or days, the skin becomes much darker. 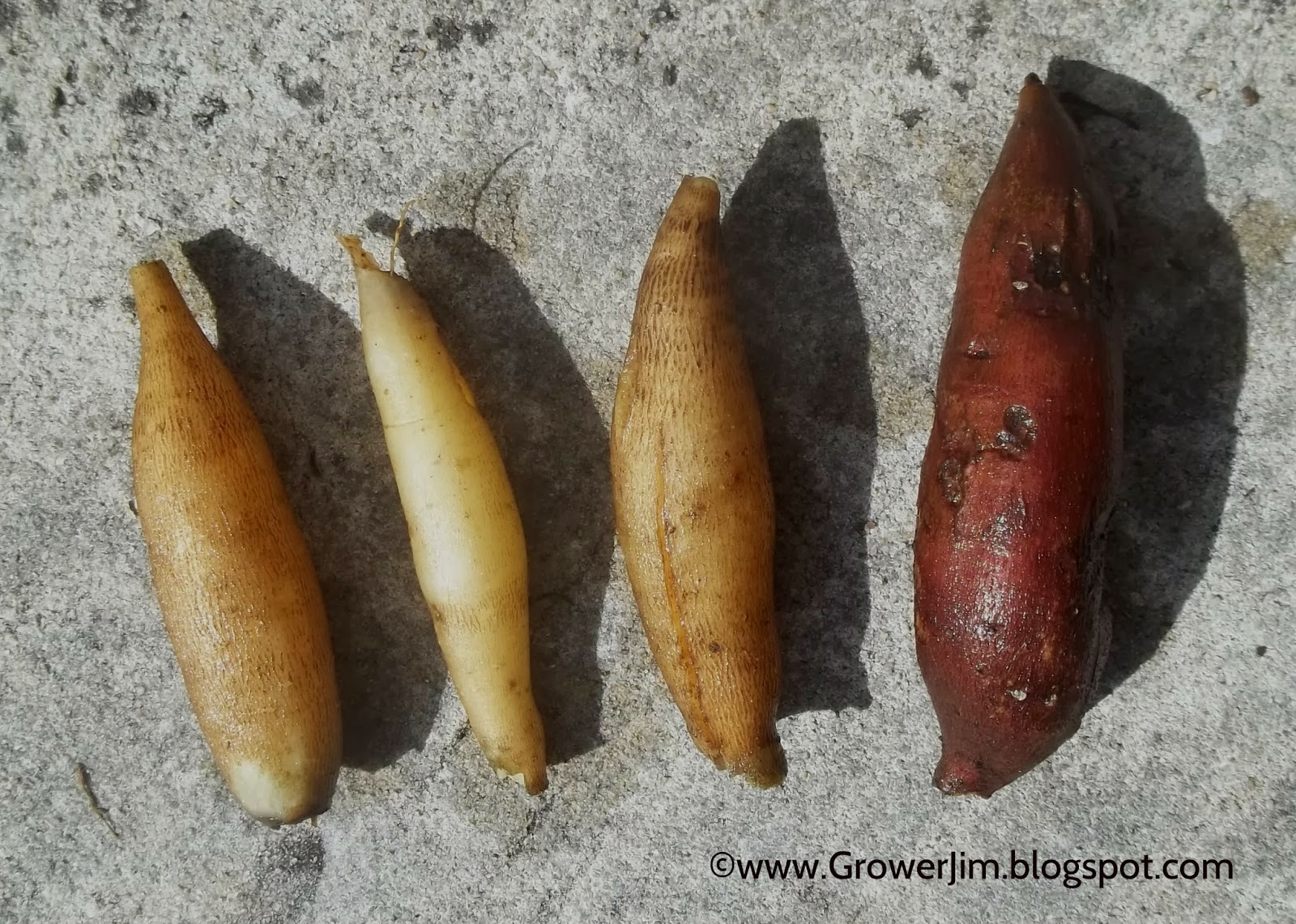 The thin skin is generally scraped off before eating, but I find that to be an unnecessary step for freshly dug roots because the pale skin doesn't seem to affect the flavor in any way. The darker skin of cured or dried roots may impart a resinous flavor. Yacon root may also be steamed or baked, but I prefer them raw. The rhizomes are also edible, and have the same flavor as the root.

The sugar level in the root increases over time while in storage, but since I let the plants go completely dormant before digging, I can't detect any difference in sweetness between fresh-dug and cured roots. In climates with a shorter growing season, where the crop is dug at first frost, I would imagine there is a more pronounced difference in taste.

Yacon is native to the Andes mountains of South America and is cultivated from sea level up to 9000 feet. It is recommended for USDA Zones 7-11. It will grow in full sun or part shade, and produces best with a steady supply of moisture. The plants rarely set viable seed, but are easily propagated by division of the rhizome or by stem cuttings.

I like to eat yacon simply for the flavor and texture, but its sudden popularity is no doubt due to its medical benefits:
Weight loss and blood sugar: A study published in 2009 in "Clinical Nutrition" concluded that "Yacon syrup is a good source of fructooligosaccharides and its long-term consumption produced beneficial health effects on obese pre-menopausal women with insulin resistance. Daily intake of yacon syrup produced a significant decrease in body weight, waist circumference and body mass index."

Cancer prevention:  "Food and Chemical Toxicology" published a study in 2012 finding that "yacon
and yacon plus Lactobacillus casei intake may reduce the development of chemically-induced colon cancer." Other studies have found similar results on other types of cancer cells.

Prebiotic:  The "Journal of Agricultural and Food Chemistry" published a study in 2003 proposing "yacon fructooligosaccharides as a potential novel source of prebiotics."

Antioxidant:  In 1999, the  "Journal of Agricultural and Food Chemistry" published a study identifying two major antioxidants in yacon root.

These are just a few of the many studies confirming a wide variety of healthful benefits from eating yacon. What benefits have you experienced from yacon?
Posted by Grower Jim 5 comments: