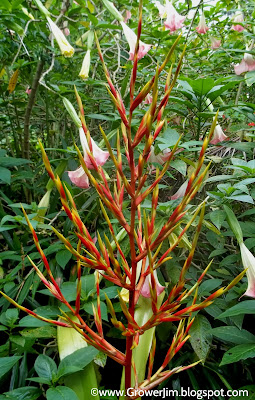 Aechmea blanchetiana (eek-MEE-uh blan-ket-ee-AY-nuh) is one of the largest of the commonly grown Aechmeas. Its size makes a big impact in any landscape or bromeliad garden. Mature plants often have a spread of 5 feet or more and the flower spike may reach 6 feet in height. The inflorescence emerges in early summer and is a colorful blend of red, orange and yellow. It is long-lasting and keeps good color for months on end. The actual flowers are small, yellow and tubular. 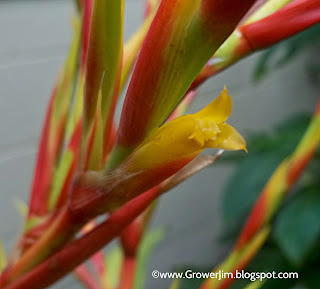 The foliage color varies with the amount of sun the plant receives and may range from light green to yellow, orange or reddish, depending on the clonal variety. The best color is usually obtained in full sun. 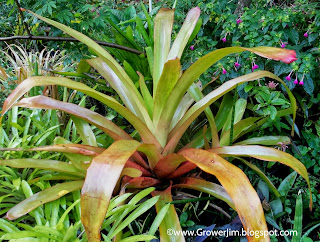 Frost or a hard freeze can be damaging to the large leaves so it's best grown in sheltered locations or covered up on the coldest nights.
Posted by Grower Jim No comments: 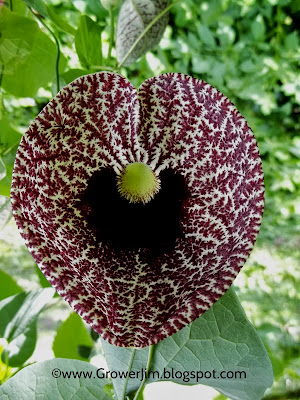 The flowers of Aristolochia elegans are the most stunning aspect of this plant, but it also has many other interesting features. The plant is a vine that climbs by twining around any available support, reaching a height of 10 to 15 feet.
The leaves are broad and somewhat heart-shaped, approximately 3 inches across, but the size varies greatly. Where the petiole joins the stem, there is a distinctive small leaf-like appendage. 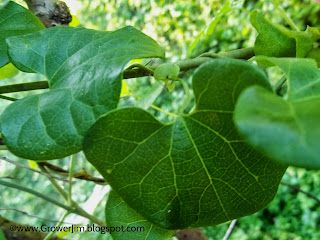 The foliage is a favored food of polydamas swallowtail butterfly larvae. Some sources claim it is toxic to pipevine swallowtails, but others claim it is not. The evidence appears mostly anecdotal and I am unable to find any scientific research to confirm either way. 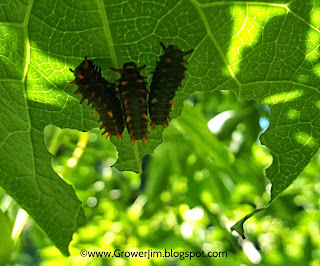 This species is also sometimes known as Dutchman's pipe, calico flower, and pipe vine. The name pipe vine arises from the appearance of the flower buds. With a little imagination you can visualize the similarity to an old-fashioned Dutch tobacco pipe. 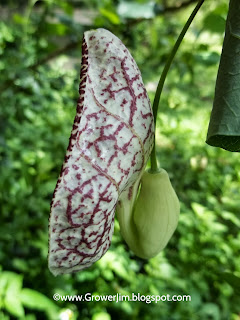 Flowering occurs during summer and fall when the plant is actively growing. Individual flowers are 3-4 inches long.
Pollinated flowers develop a cylindrical seed pod that splits open when mature, becoming an unusual basket holding the seeds that are then scattered as the basket blows in the wind. 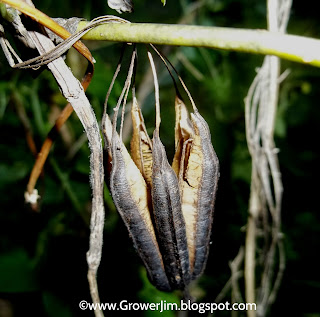 The seeds can be quite prolific and this species is considered potentially invasive in Florida. In the garden it can be easily controlled by snipping off the green seed pods before they mature.
Aristolochia elegans is synonymous with A. littoralis and is native to South America. It is recommended for USDA Zones 8-10, being evergreen in the more tropical climes and perennial in Zone 8. They perform best in part sun, part shade.
Posted by Grower Jim No comments: 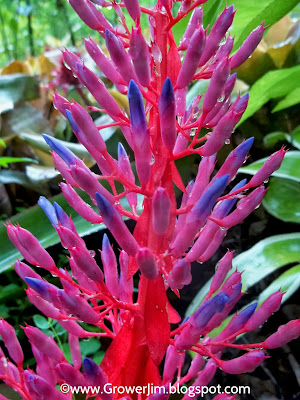 Portea alatisepala provides long-lasting color through the late summer and fall months. Plants grow fairly large, with a leaf spread of 4-5 feet and an overall height of 2-3 feet. 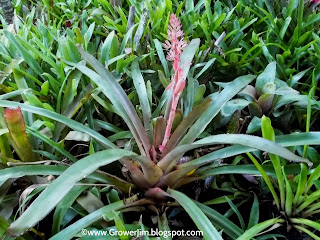 Individual leaves can be up to 2 1/2 feet long and 2 inches wide with a serrate edge.
Foliage color ranges from olive to purplish-green. 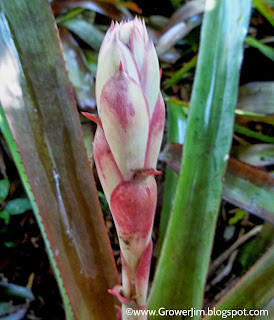 The flower spike is erect or slightly leaning, and extends above the foliage. The inflorescence is hot pink and the flower petals are vivid blue. 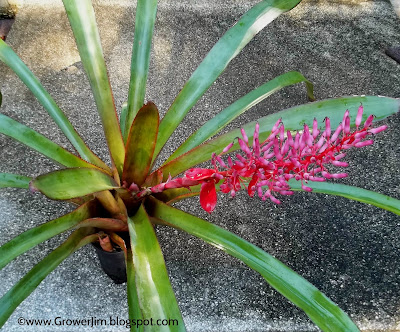 When flowering is finished, the fruits of pollinated flowers swell up and continue to provide good color in the landscape for several more weeks. 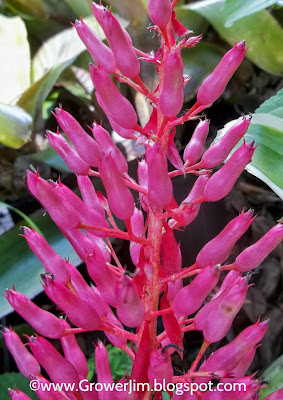 Portea alatisepala performs well in shade or filtered sun. Plants tolerate temperatures as low as 26°F if grown under tree canopy where frost won't damage the leaves.
There are color forms with plain green or reddish-tinted leaves and pink or lavender-purple sepals.