Dioscorea alata is commonly known as winged yam, water yam, white yam and ñame.
The species name alata means winged and refers to the flattened edges of the squarish stems. 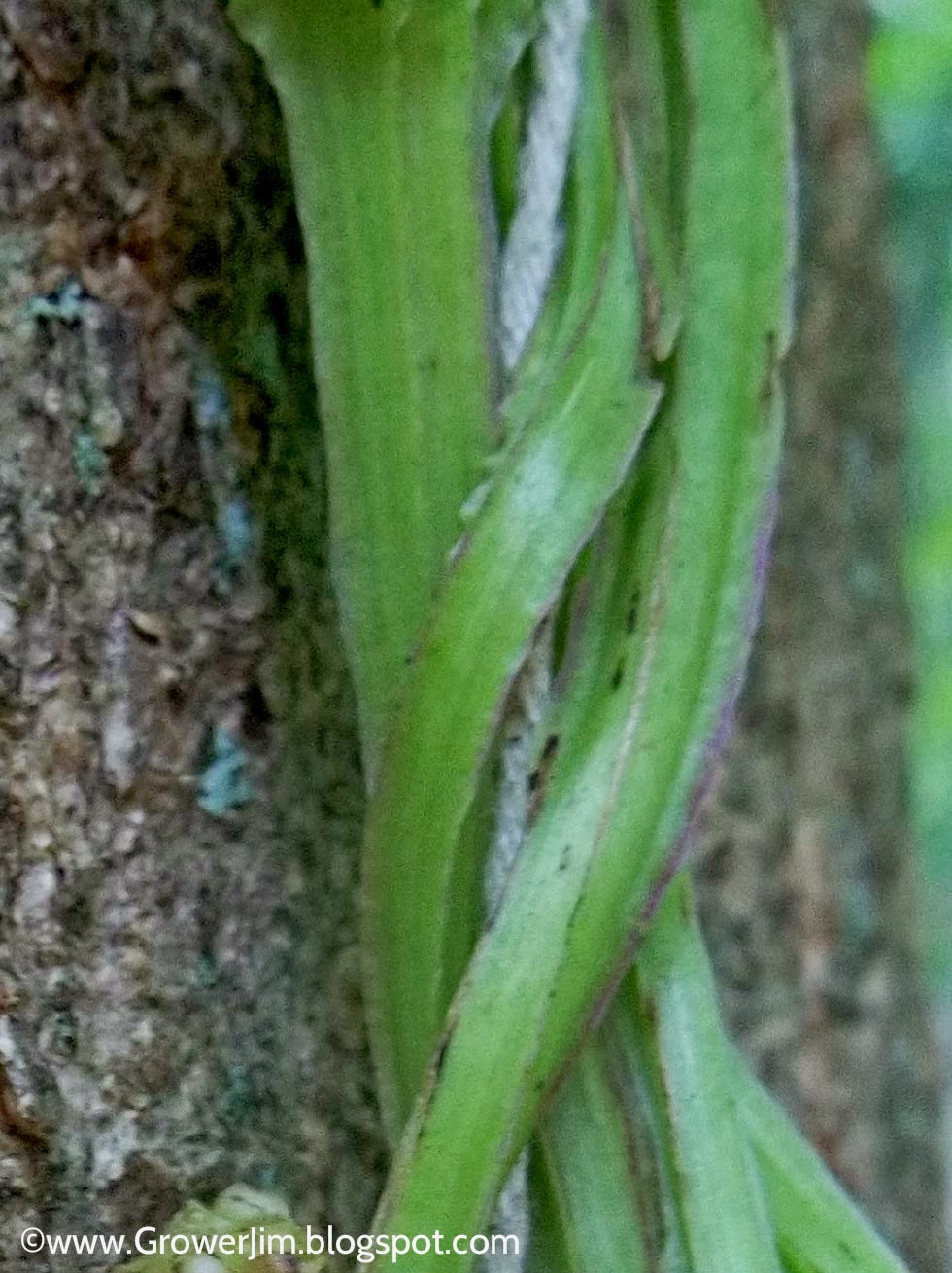 This is one of the true yams that are tropical in origin. Yams are twining vines that quickly climb to the top of any available support. They can completely cover nearby trees or shrubs with leaves that are arrow-shaped and 6-8 inches in length. They are arranged opposite each other on the stem. There are other similar-appearing species with poisonous tubers so make sure you're able to properly identify the edible ones if you're going foraging. 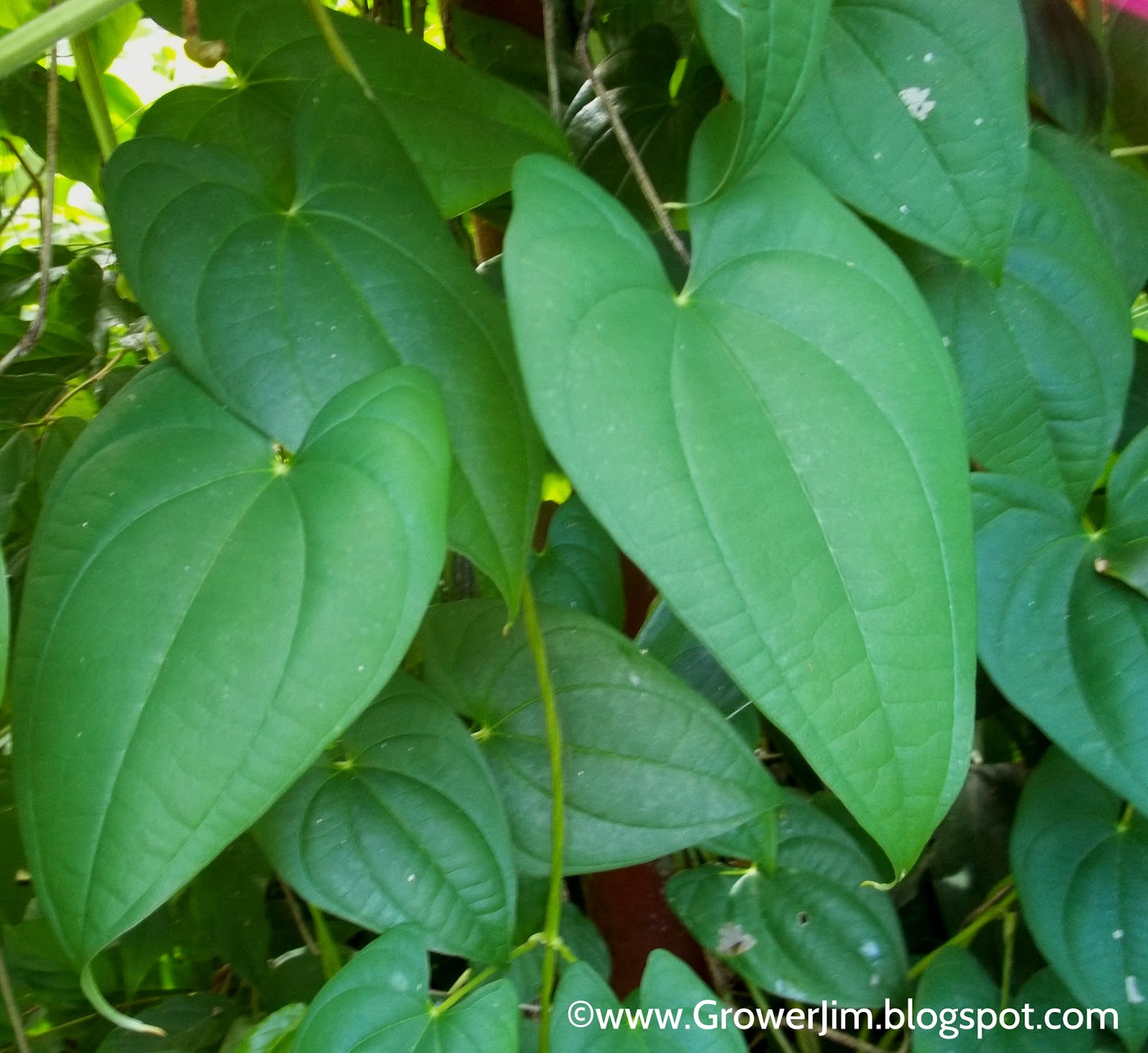 While the plant is in active growth it will put out aerial tubers at many of the leaf joints. These aerial tubers are edible, but generally not considered as good for eating as the underground tuber. They're also considerably smaller and, pound for pound, require a lot more effort to peel and cook. The aerial tubers are, however, ideal propagating material for starting new plants.

They'll grow where they fall on the ground or you can plant them in new locations for additional yam production the next year. They sprout readily, and in some regions this is considered an invasive species. The bumps on the tuber become roots when in contact with soil. Here you can see a fallen tuber taking root: 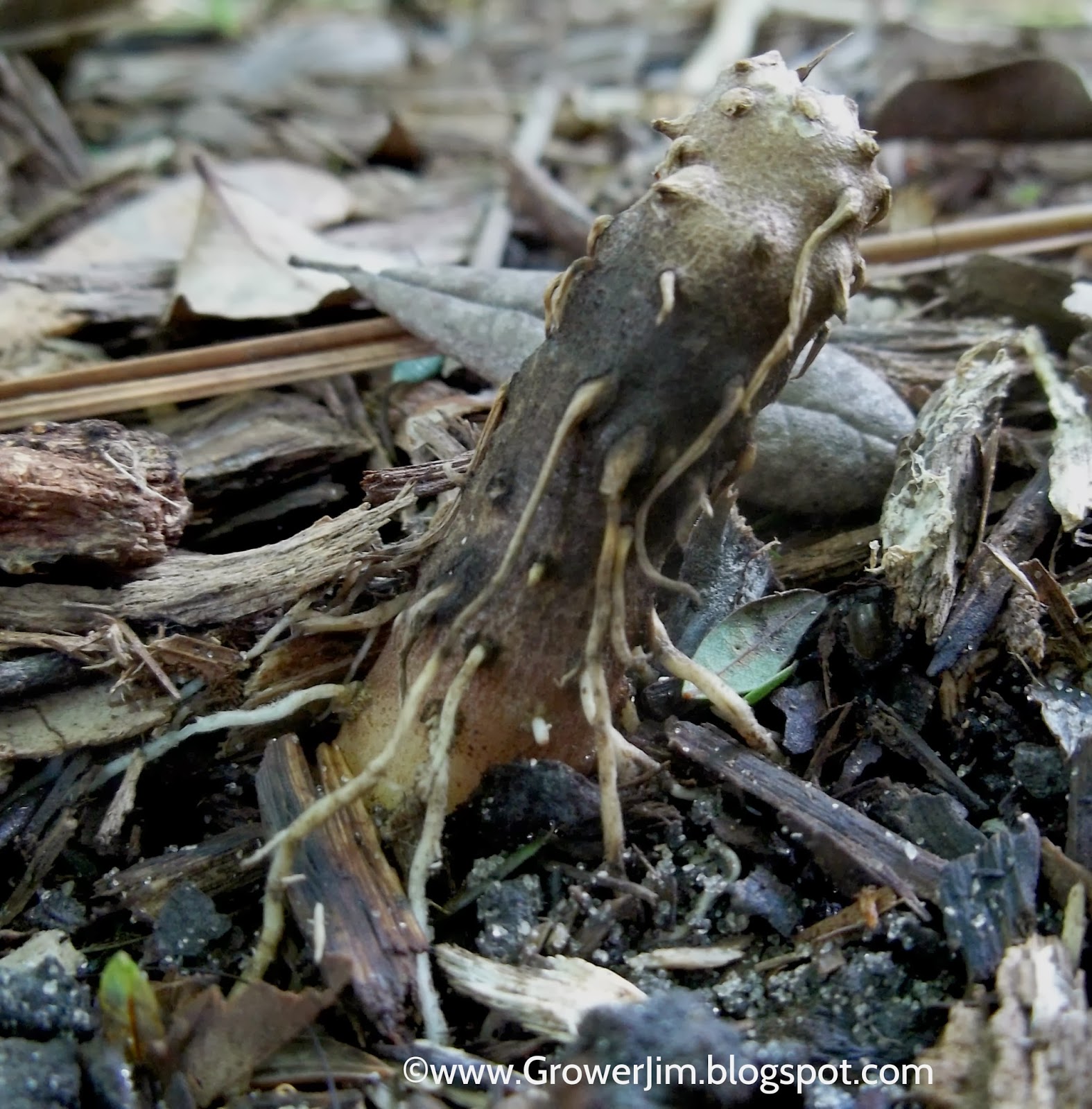 During the growing season the edible tuber increases in size until the vine goes dormant in late fall or winter. At this time the yam tuber is dug and consumed. Tubers left in the ground will sprout again in the spring and increase in size the following year. Yams grown from aerial tubers will usually produce 1-3 pounds of edible tuber the first year, but over a few years time they can achieve a weight of over 100 pounds.
Here's a nice 3-pounder from my garden: 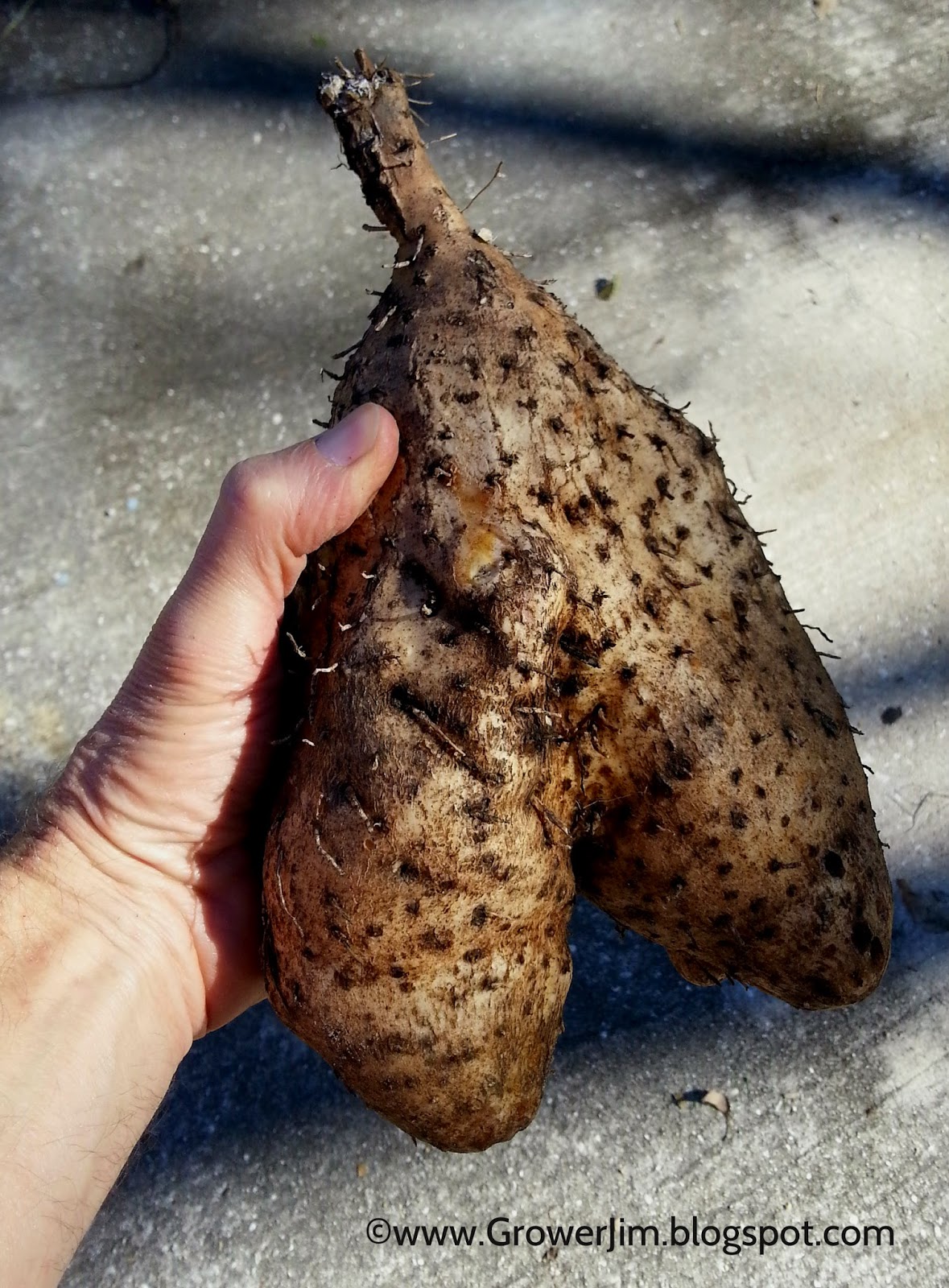 The mature yams are peeled and then baked or boiled until tender. When raw, the cut surfaces have a very slimy texture, but this disappears when cooked. There are many cultivated varieties with different shapes and sizes of tubers, and also some with white, yellow or purple flesh. The purple yam is commonly known as Ube. 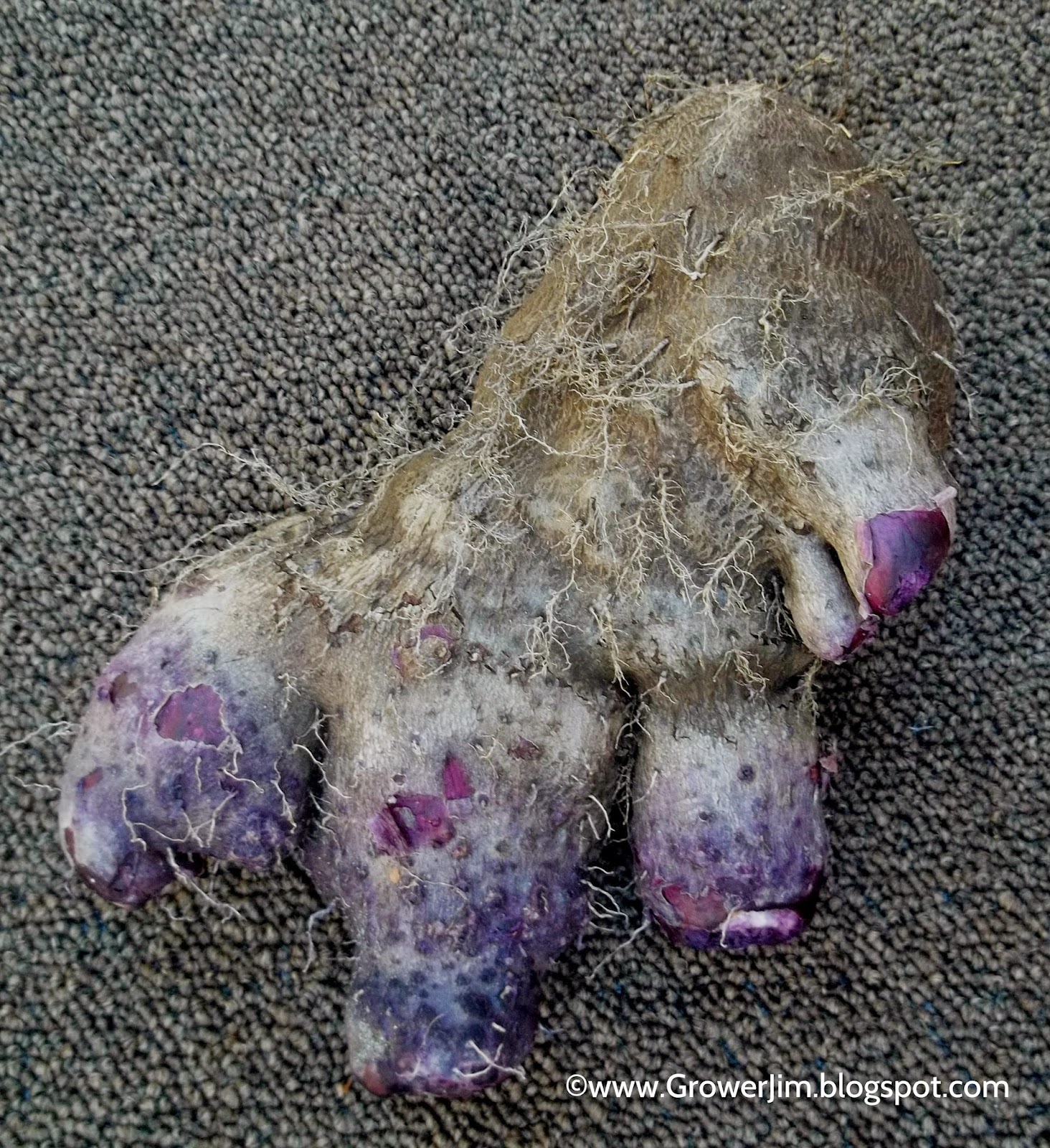 Dioscorea alata is believed to be native to Southeast Asia, but has been cultivated in tropical Africa for over 2000 years. From there it was brought to North America on slave ships as early as the 17th century. Its cultivation was encouraged due to its edibility and ease of growth. It is now distributed throughout tropical regions around the world.

Winged yams grow best in sun or light shade, and flourish in moist soils. It has naturalized throughout much of USDA Zones 9 and 10 in the Southeastern U.S. Some locations list it as an invasive species.
Posted by Grower Jim 2 comments: