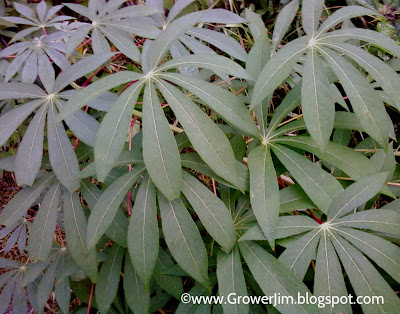 Manihot esculenta, also known as cassava, yuca and manioc, is a fast-growing perennial with an edible tuberous root. In common usage, the plants are usually referred to as cassava and the roots are marketed as yuca. This may vary depending on locality. The roots are the source of the starch that is processed into tapioca.

Plants quickly grow to a height of about 10-12 feet and then flop over if not topped. Trimmings can be chopped and composted, or spread as a weed-suppressing mulch between plants. Stems can reach 20 feet or more in length if allowed to sprawl. 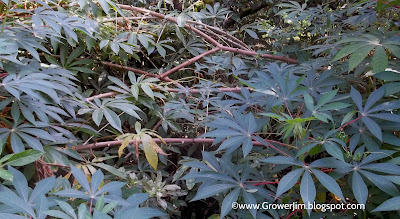 Cassava is grown world-wide in tropical regions, but originated in Central and South America. There is archaeological evidence that it has been in cultivation for at least 4,000 years and possibly as long as 9,000 years.
The leaves are palmate, about 8-10 inches across, and deeply lobed. Some cultivars have red petioles, making a nice contrast to the dark green leaves. 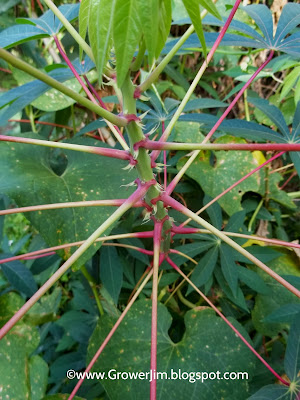 Older stems have a distinctive prominent stub where each leaf was attached. 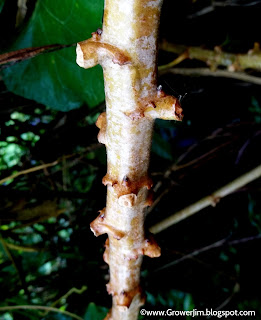 Plants put in the ground in spring grow throughout the summer and flower in autumn. The cream-colored flowers appear in clusters at the ends of the branches, but they are small, and go almost unnoticed amid the foliage. Only close inspection reveals their beauty. 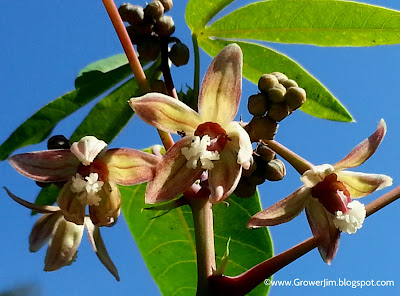 After about 9-10 months of growth the yuca roots are large enough to harvest. Roots that are 3-4 inches in diameter and 10-15 inches long are a harvestable size. Production volume doubles if harvest is put off until after the second vegetative cycle, but the roots are supposedly not as tender.
When grown commercially, the entire plant is dug, roots are harvested, and a new crop is planted the following spring or at the start of the rainy season. If you only have one or two plants, it's possible to dig around the base of the plant, harvest the mature roots, and leave the plant to produce another year. I've been doing that for years on the plant pictured below. 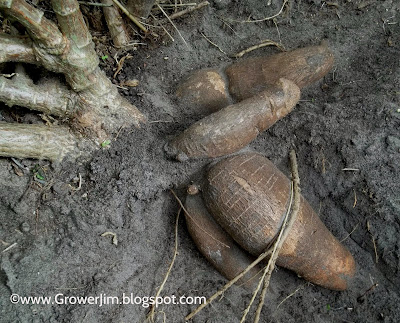 The one root at the top of this grouping weighed over 6 pounds. I'd only dug out half of the root system when this photo was taken, so you see they can be quite productive.

Yuca roots are prepared by peeling, then cooking in the same manner as potatoes; boil, bake, roast, or fry them. They must be cooked before eating due to cyanic compounds present in the raw roots. The heat from cooking renders these compounds inert. Some cultivars with very low levels of cyanide can be eaten raw, but you'd have to be certain you had that cultivar and bitterness is not necessarily an indication of cyanide levels.

The grated root is used for cassava bread, and young leaves are also edible after cooking. To prepare the leaves, remove the petioles, then finely chop, grind or pound the leaves. Cook them as greens, seasoned to your own liking, or add to soups and stews. I like to puree the leaves in the blender, cook and season them, and serve over rice or pasta. There are lots of recipes available online.

**Cassava leaf must be cooked thoroughly before eating! Cassava leaf is a good source of vitamin A, C, B vitamins, iron, calcium, zinc, manganese and magnesium.

There is a variegated form of cassava that is primarily grown as an ornamental. It doesn't produce the large roots of the commercial varieties, but makes a showy addition to any landscape. 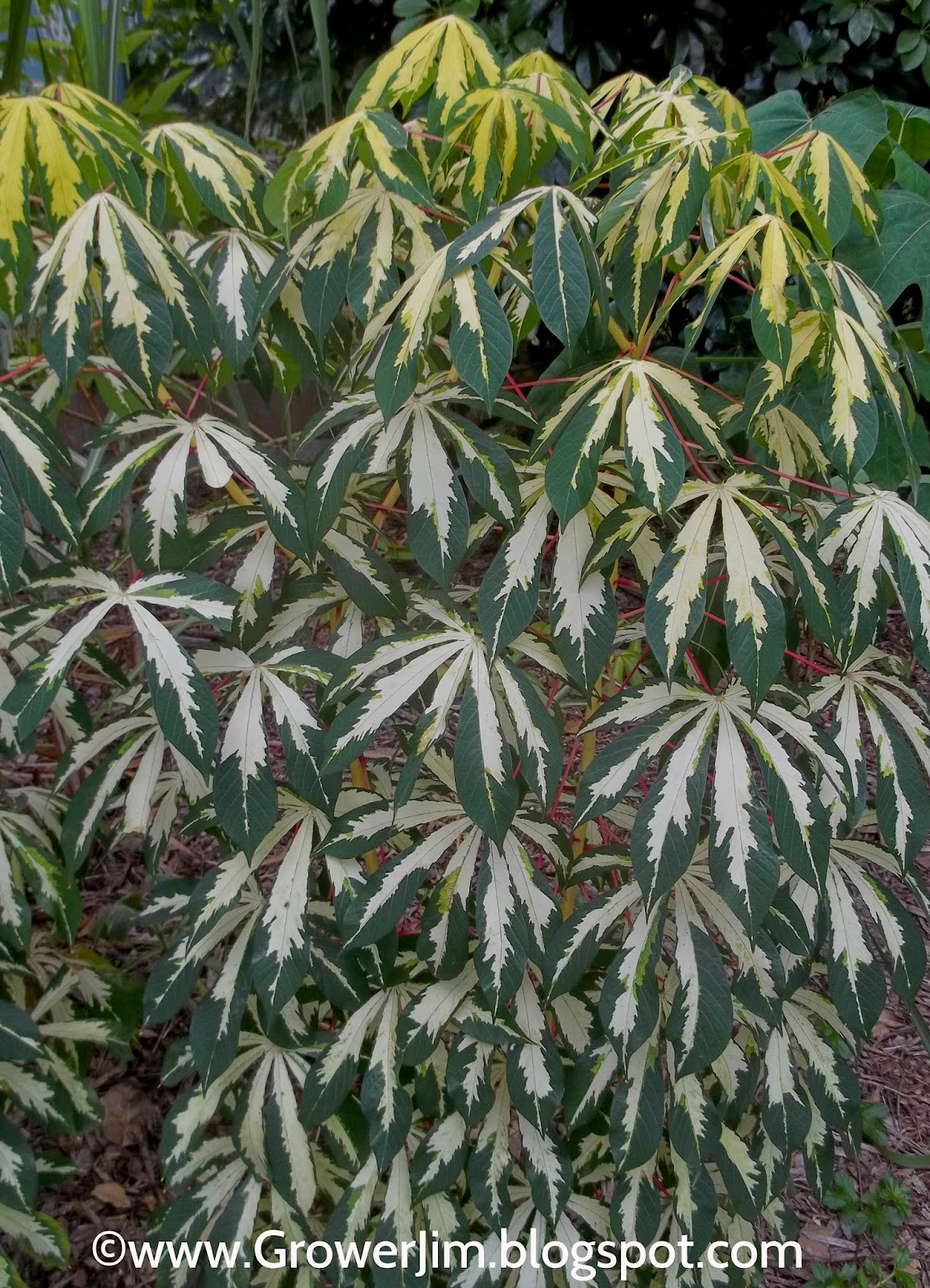 To start a new crop, mature cassava stems are cut into sections and laid horizontal in a shallow trench, then covered with soil. Alternately, the may be simply poked straight down into the dirt, with a few nodes visible above the soil line. In commercial plantings they are spaced about 4 feet on center. The cuttings produce an abundance of roots and quickly start growing. I have cassava plants and cuttings for sale -- click the link at the bottom of this post. 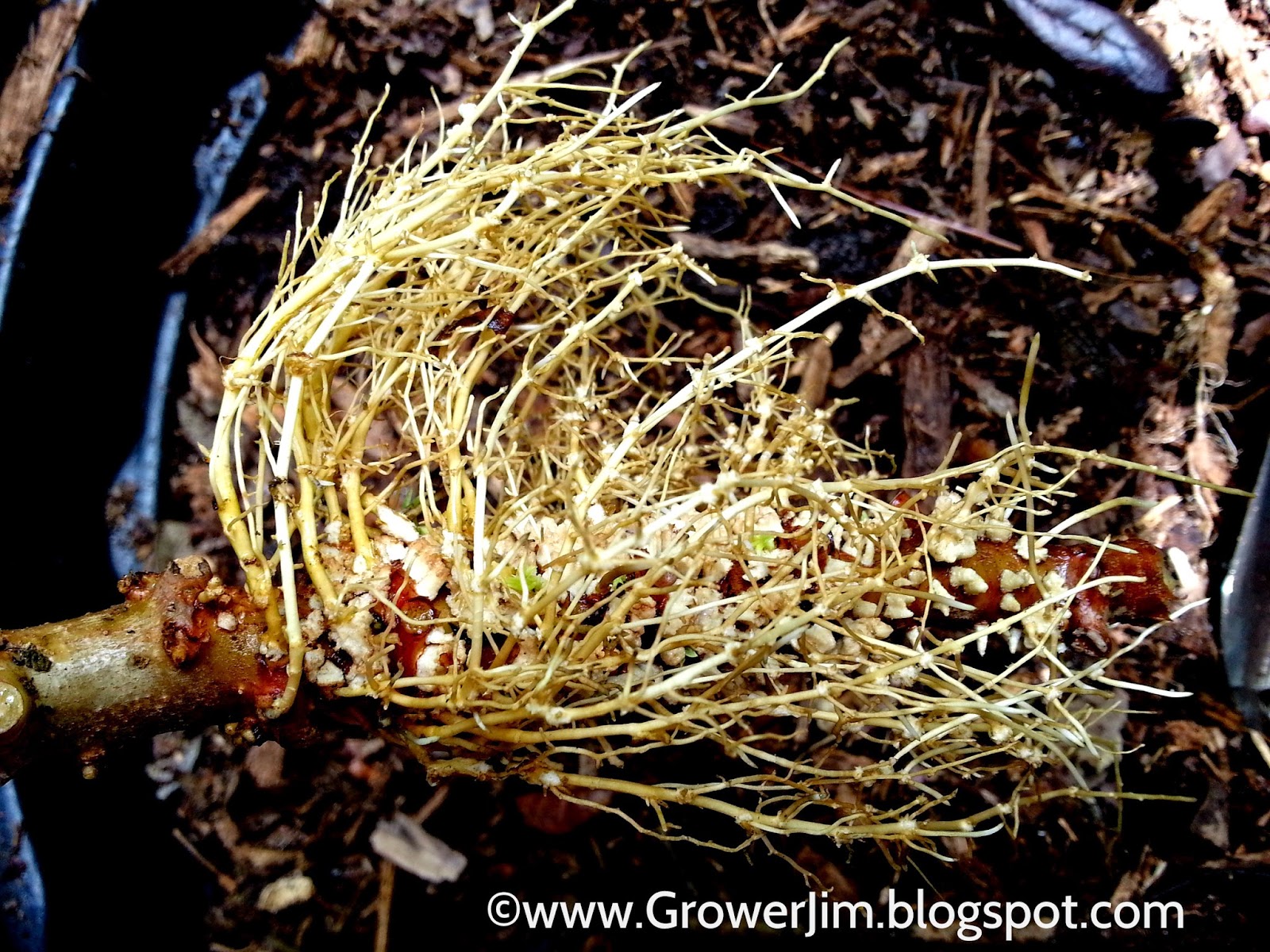 Cassava tolerates a wide range of soils and environmental conditions, making it an ideal crop for impoverished soils and drought-prone regions. In some parts of the world, cassava is grown as livestock feed or as a biofuel.
Manihot esculenta is recommended for USDA Zones 8-11. It can be grown in colder climates as an annual ornamental, but the growing season won't be long enough to produce a good crop of roots.
Buy cassava cuttings.
Posted by Grower Jim 9 comments:

Email ThisBlogThis!Share to TwitterShare to FacebookShare to Pinterest
Labels: How to:, perennials, shrubs, vegetables 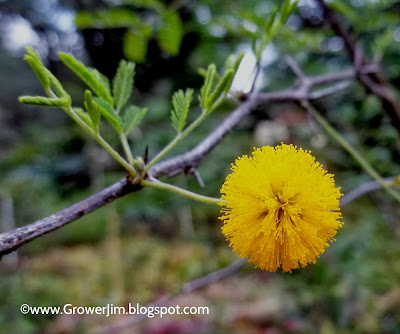 The flowers of Vachellia farnesiana have a fragrance similar to grape candy, which is probably where it gets the common name Sweet Acacia (this species was previously in the Acacia genus). The flowers may appear at any time during the year, but are more numerous during the cooler months. The inflorescence is a fuzzy yellow ball of multiple flowers about 1/2 inch in diameter. 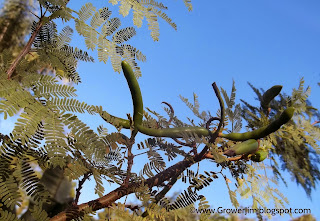 Pollinated flowers develop into 2- to 3-inch long, lumpy green pods that turn black when mature. Seed germination is improved by scarification and soaking. 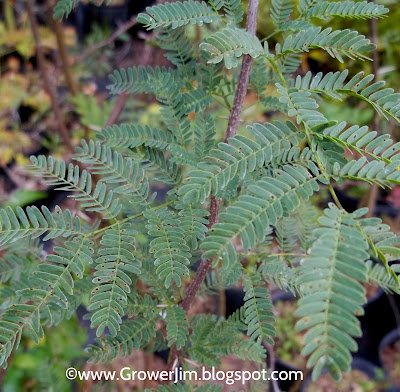 The bipinnately compound leaves have a delicate fern-like appearance, but the entire plant is covered with sharp thorns. 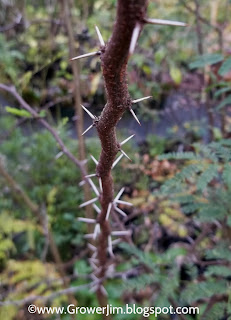 This species grows into an open-branched tree or shrub about 15-20 feet tall. The foliage is semi-evergreen and is often retained on the plant during warm winters.
Vachellia farnesiana is believed to be native to tropical America, but it is now found growing all around the world.
It is a nitrogen-fixing plant, capable of utilizing atmospheric nitrogen as a nutrient source, and is very drought-tolerant once established.. Growth and flowering is best in full sun. It is recommended for USDA Zones 8-11 and is tolerant of acidic, alkaline and salty soils. 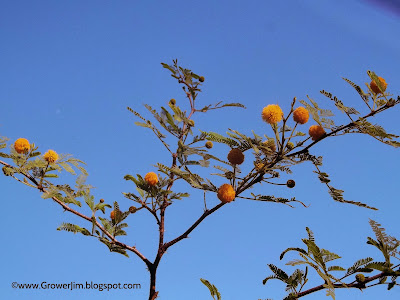 The leaves, roots and bark are used in folk medicine to treat a variety of ailments and an essential oil distilled from the flowers is used in the perfume industry.
Posted by Grower Jim 5 comments: