This month's creature is a mostly nocturnal animal and the only marsupial in North America, the opossum. Although they are seldom seen and rarely heard, opossums are intelligent creatures that help control the population of vermin around homes. They eat just about anything, including insects, fruit, mice, rats and carrion. They are nomadic and go wherever the food is. Learning and discrimination tests indicate they are smarter than dogs. Opossums are clean animals that bathe and groom themselves as meticulously as any cat. 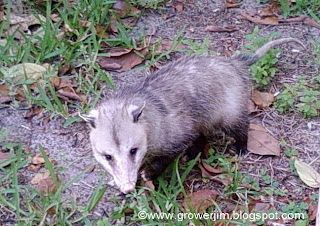 As a species, they are survivors. Fossil remains of these creatures have been found from 70 million years ago. They have a high level of immunity to most diseases and are more resistant to rabies than virtually any other mammal.
The gestation period of an opossum is only 13 days and the young are the size of a honeybee when born.  Litters of 5 to 8 are produced up to twice a year and they remain in the mother's pouch for about three months. Although they sometimes live in trees, they prefer nesting in underground dens. They do not dig their own burrows, but use those abandoned by other animals.
When cornered, opossums may hiss and bare their teeth, but if there is no avenue of escape, they fall over and play dead. They remain in this state until the danger has passed.
Now, don't you play 'possum! Join the fun below!

The First Friday Creature Feature is hosted right here on the first Friday of every month.  You're invited to join in!  Here's how:
1. Write a post featuring some creature that lives in your garden.
2. Within your post, include a link to my Creature Feature post so your readers will know where to find the creatures.
3. Add your link below and leave a comment.
Thanks for participating and please join in again next month!

Of course, we have our Possums here in Australia. They are regular sights around my place and look quite different. They don't have a long pointy bare tail for one thing. It's interesting to hear that the Opussum is so resistant to rabies. Great collection of facts here, Jim and lovely shots. I've added a link to a post I did this week on a creature that visits my place a fair bit.

I learnt 2 new things today. I'd never seen an opossum before. In Australia we have possums but they look quite a bit different. Alsi i didn't realise you hosted Creature Feature. I will see what I can do to join in.

And here I thought the armadillo was a marsupial, but it's a placental mammal. Surprising that they are smart. I've read that bears are much smarter than dogs. I've seen border collies that made a lot of people look dumb.

I am loving your civilised and intelligent opposum. How big is it. Regarding the Friday creature feature I simply can't join in because all I have here are slugs and pigeons.