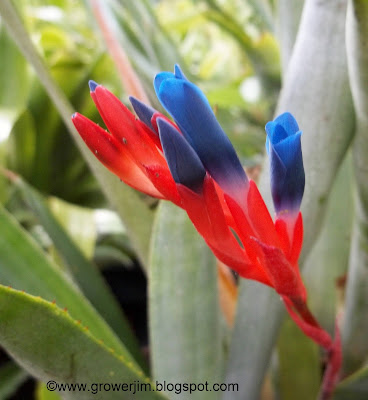 Quesnelia lateralis has an upright to slightly arching inflorescence of vivid red and blue. In early winter, the spike rises to about the same height as the foliage. Flowering seems to be best on specimens that have formed clumps of at least 4-5 plants. The blue flowers emerge in succession over a period of about a week or so, with the red portion of the inflorescence lasting a bit longer. In all, you might get about three week's worth of color.

The plant has an upright growth habit, reaching a height of about 1 1/2 feet. Leaves are solid green on the upper surface and the underside shows some random banding patterns in the trichome arrangement. The leaf margins have small spines along the entire length. 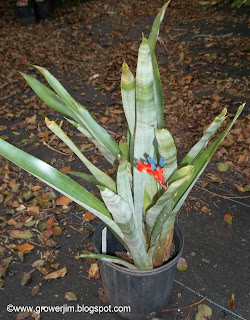 Mine are currently growing in morning sun and afternoon shade, but I've also had them in full afternoon sun where they did fine.
Several hours at 26°F hasn't bothered them during winter cold snaps.