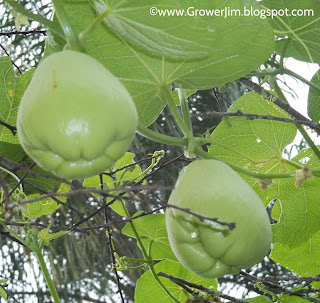 Chayote (Sechium edule) is a perennial squash that will produce well for several years. The vines grow rapidly and can extend more than 50 feet from the base of the plant. This requires a strong support. A sturdy fence or horizontal trellis is ideal, as it keeps the fruit within reach and easy to pick. Other alternatives would be to plant on a vertical trellis or small tree. The vine attaches itself and climbs by means of tendrils that curl around whatever support is available. 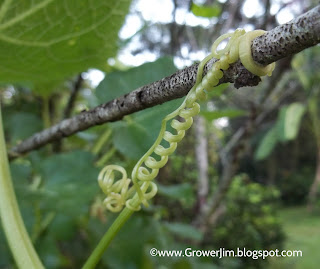 Chayote will grow across the ground like other squash, but they take up a tremendous amount of space in the garden and you'll have to pick through the vines to find the mature fruits. Leaves are similar to most other cucurbits and grow to about 8 inches in diameter. 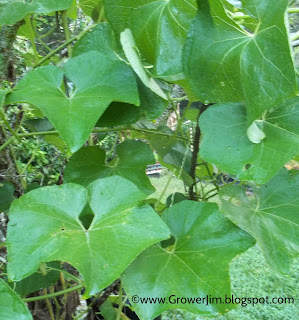 Chayote are native to a wide swath of Central America and have been cultivated there since pre-Columbian times. A long growing season is required, as the formation of flower buds isn't initiated until the days shorten in fall. It takes about another month for the flowers to develop and open, then an additional month for the fruit to grow and mature. It is recommended for USDA Zone 8 or higher. 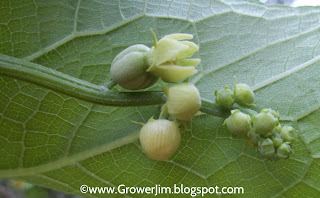 Flowers grow on a stalk emerging from the leaf axils. They produce a lot of nectar and chayote is said to be one of the best honey plants. Hummingbirds are also attracted to the blossoms.

Female flowers are at the base of the stalk, one per stalk. The male flowers open in sequence on the elongating stalk. In frost-free areas, crops may be harvested nearly continuously for about 6 months, and older plants may yield several hundred fruits per year. I've harvested as many as 45 squash in a single day from one plant.
Individual fruits typically reach about 6 inches in diameter, but they are usually harvested at a smaller size for commercial production. Multiple varieties exist, some with deeply furrowed or very spiny skin. The base of the fruit is distinctively grooved or puckered. 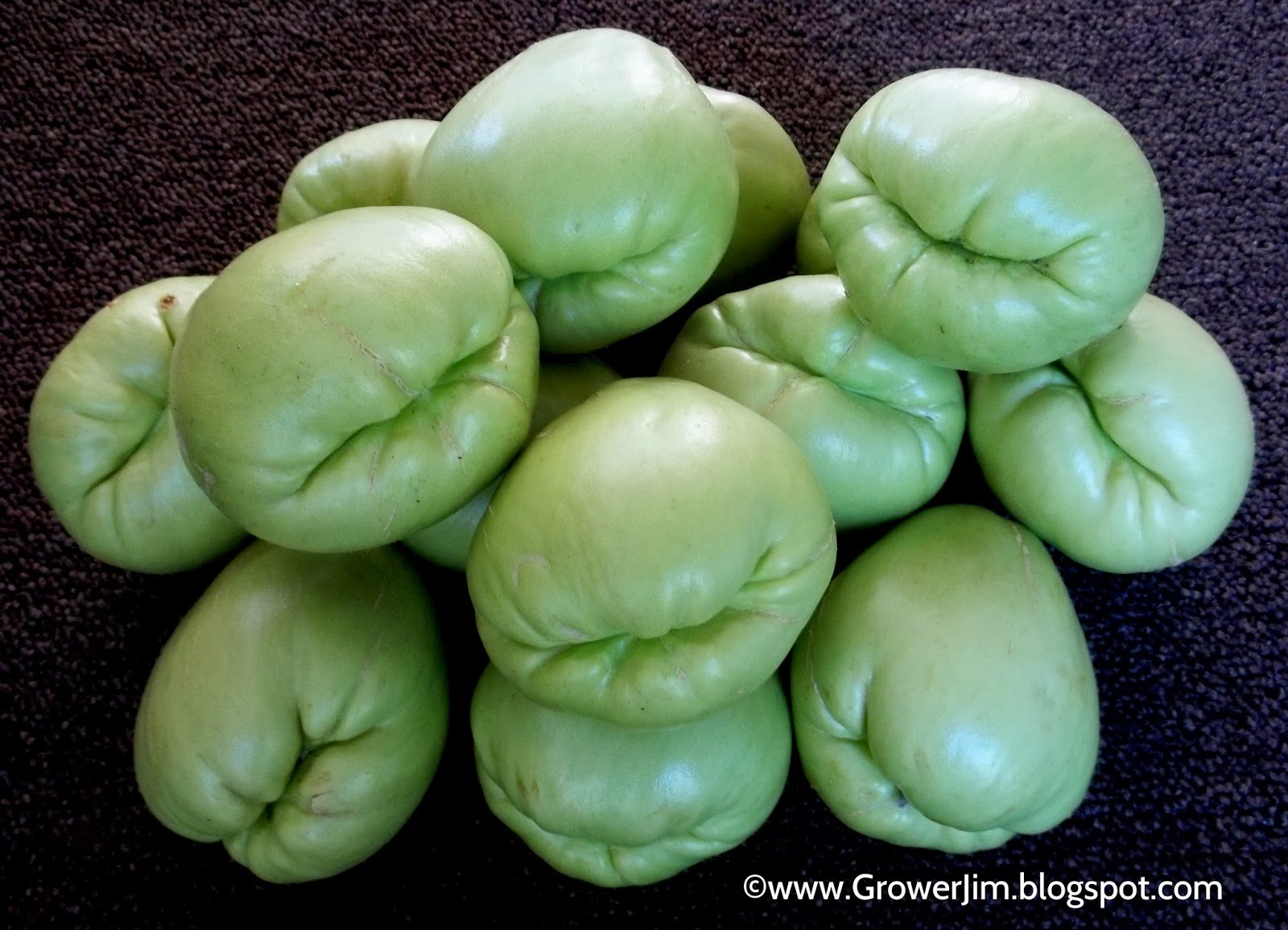 The chayote squash is prepared by peeling and then boiling, steaming or baking. It's also possible to cook it first and then remove the skin, as is done with most winter squash. It may also be eaten raw or used like cucumber in salads. The skin of fruits picked before they reach full size is tender and edible like that of summer squash. As the fruit ages the skin becomes more tough and fibrous. Young raw fruits have a slightly sweeter taste than older ones.

The sap from the raw cut fruit can cause skin irritation or numbness in some individuals. This may vary from plant to plant. I have experienced some temporary reduced sensitivity in my fingertips after peeling a large quantity of raw fruit, but I find it less bothersome than wearing gloves.

The squash remains firm after cooking and has a mild, slightly buttery flavor. There is a large single seed at the center of each fruit that has a delectable nutty taste. The raw seed tastes something like raw English peas.

The tendrils and young shoots are edible when steamed, and unlike many "edible" shoots or vines, these have a pleasant taste. 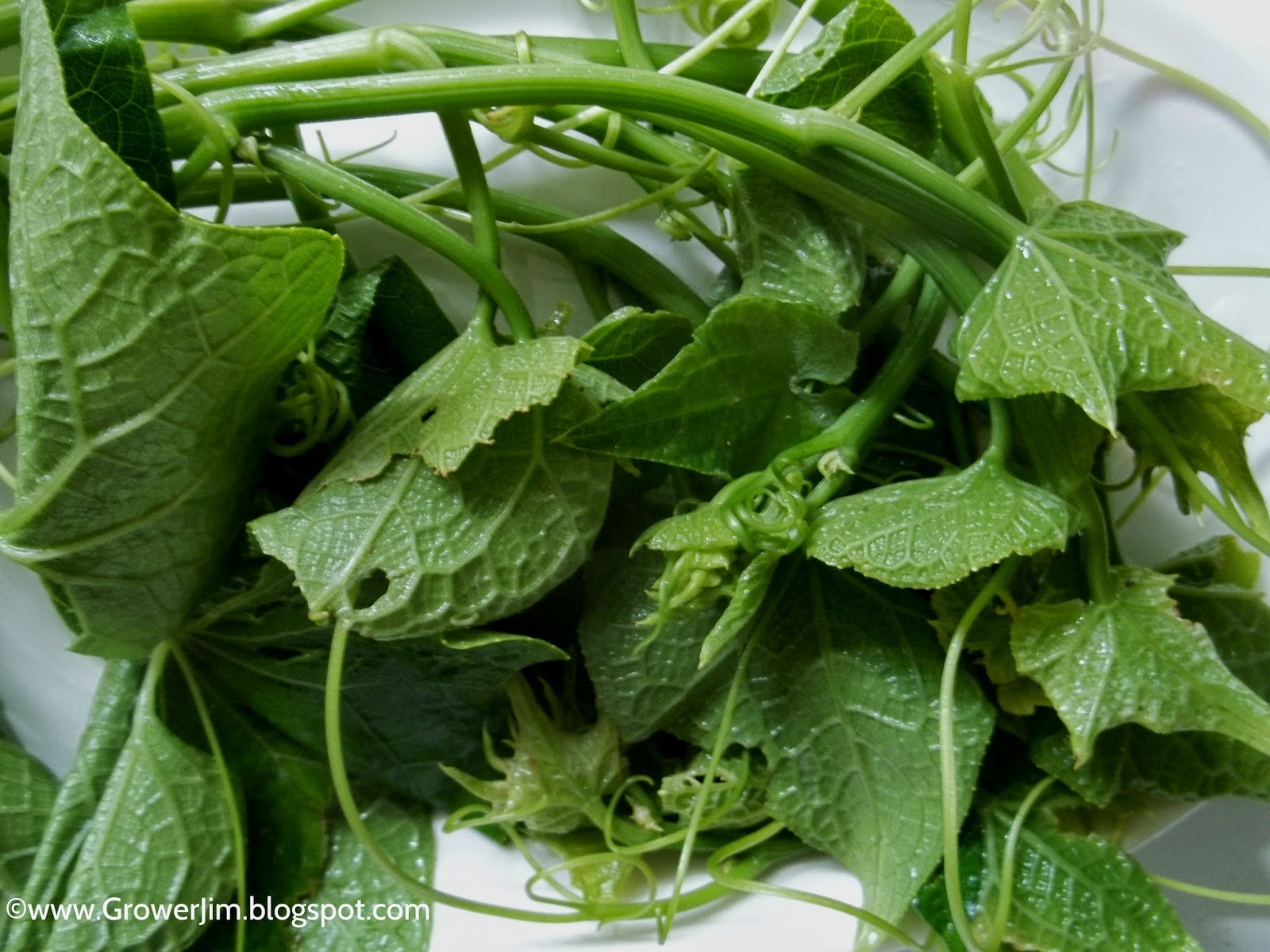 The large tuberous roots can also be dug up and eaten as a vegetable after cooking. The tuberous portion of the plant is known as ichintal. Older roots can supposedly weigh up to 20 pounds. It may be possible to dig up a root and carefully remove it without affecting the health of the plant, but I think it would be difficult. I dug around the base of a 2-year old plant and exposed the top of the storage root. The ichintal is the large, fat root growing straight down directly from the base of the plant and you can see the lateral roots spreading out to the side. 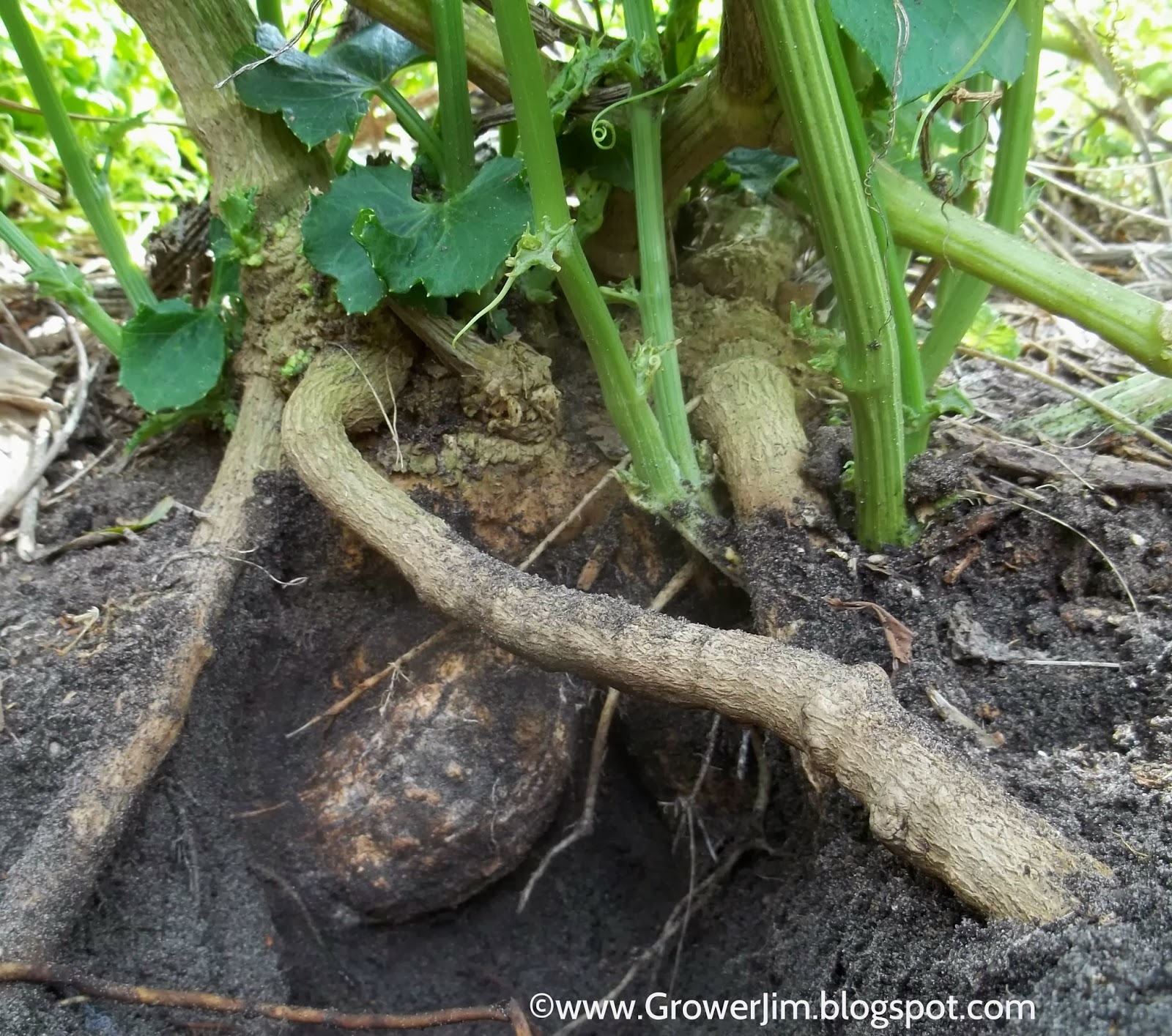 I think it would be very difficult to dig the ichintal without seriously damaging the plant, so I'm leaving it alone for now. If we get a hard freeze some year and the plant dies back, I'll try and dig the root then.

The rest of the root system spreads out over a 12-foot diameter area, so give it plenty of room and only plant shallow-rooted plants within the root zone. A full sun location is best for fruit production. In regions where the top inch or so of soil freezes in the winter, a thick mulch applied in fall will protect the crown of the plant until growth resumes in the spring.

Excess harvest can be stored by wrapping the squash in newspaper and keeping it in a cool location. It can also be frozen for use during the off-season. The squash is a very good source of dietary fiber, vitamin C, vitamin K, folate, zinc, copper and manganese, and it is also a good source of niacin, vitamin B6, pantothenic acid, magnesium and potassium. The green shoots are even more nutritious. 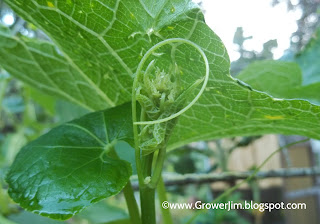 In some regions, the strong dried stems are woven into baskets and hats.

Chayote is propagated by planting the entire fruit, buried about halfway into the soil. New shoots and roots will quickly sprout from the base of the squash and start a new vine that will produce the following fall. 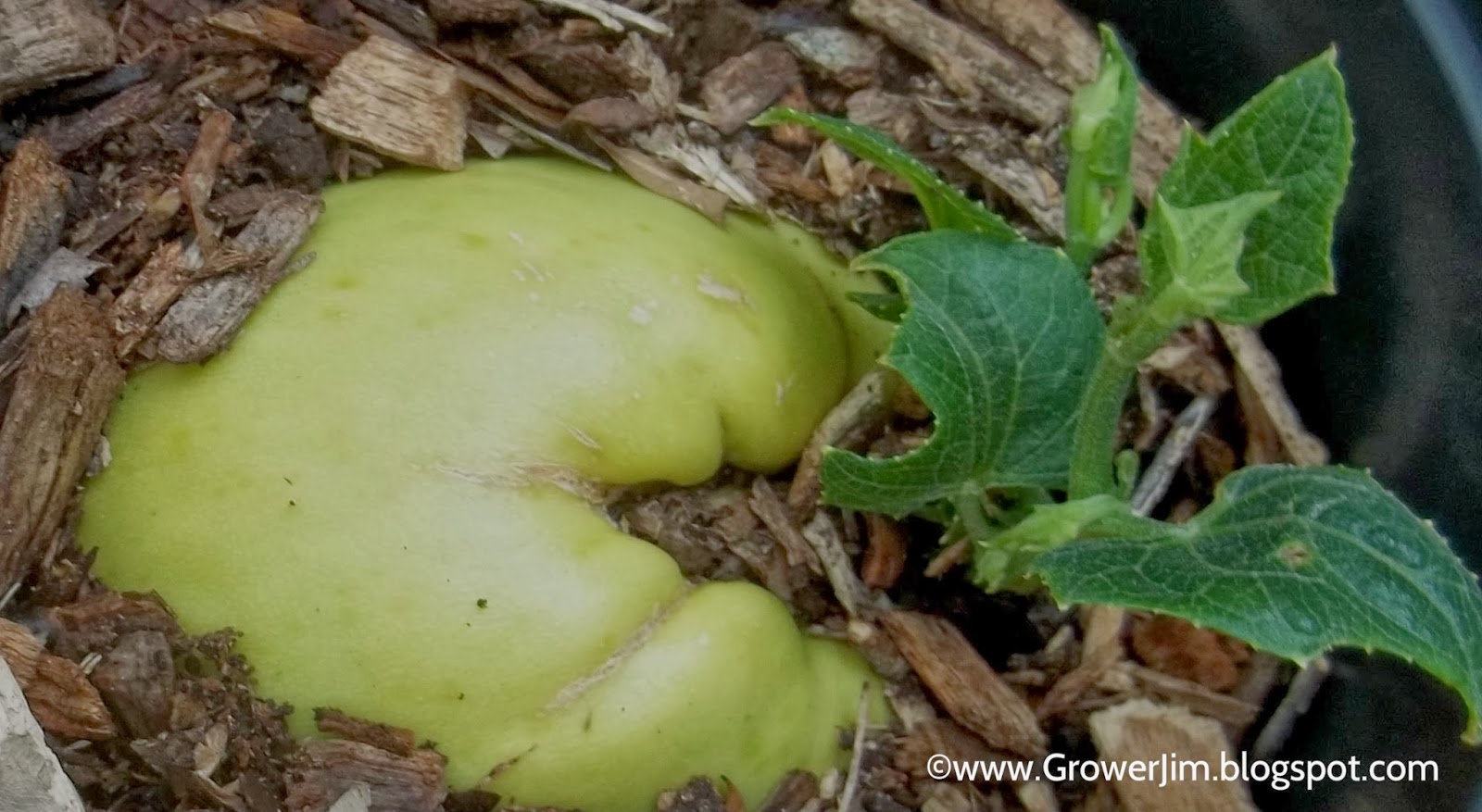 This squash is delicious when stir-fried with prawns.

I second Stiletto's use of the word "delicious." They're really not like anything else. One day I'll add these to my food forest - I'm a big fan of perennials.

After finding some at the grocery store and trying them, I'm a fan. They're definitely unique in their flavor, but it is mild, and I find it takes up other flavors well when it is cooked.