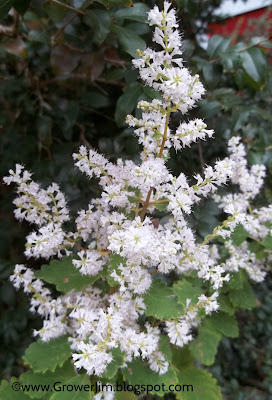 Tetradenia riparia is a shrubby plant with highly fragrant foliage and spectacular winter flowers. The leaves are thick with a scalloped edge. Glandular hairs cover both sides of the leaf, giving it a sticky feel. They emit a strong scent that remains even when the leaf dries. In its native Africa, the leaves are added to stored seeds and grains to keep out weevils and other injurious pests. There are also many traditional medicinal uses. Simply inhaling the scent of the crushed leaves is supposed to relieve headaches. A tea made from the leaves is used for colds and flu.

In winter the tip of every branch is covered with clusters of snow-white flowers. Even the smallest of plants bloom. I've had them flower in a 4-inch pot with a flower spike taller than the plant itself. The blooming period may extend for more than two months as new buds continue to open at the branch tips. The species is semi-deciduous, depending on the climate, so in some locations the plants will be nearly bare when they come into bloom. 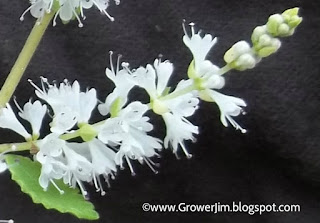 Tetradenia can grow to 8 or 9 feet in height, but is cold-sensitive, and only recommended for USDA Zones 9B-11 when planting in the ground. At 30°F the plant completely defoliates, but will leaf out again from the bare stems. Fortunately, it thrives in containers. In slightly colder zones it may be grown as a perennial (it's supposedly root-hardy to Zone 8), but frost may come before the bloom. Even then, it's still worth growing for the scented foliage and medicinal uses.

The species name, riparia, means growing on the banks of rivers, and that is where the plant is frequently found in its native habitat, as well as in dry wooded valleys and on hillsides. It grows well in full sun, but in hot climates it benefits from a little shade during the middle of the day.

The common name Iboza is a native Zulu word referring to its aromatic qualities, and that name is sometimes seen listed as the genus for the plant. Other common names include misty plume and ginger bush. Cultivars supposedly exist bearing pink or lavender flowers. 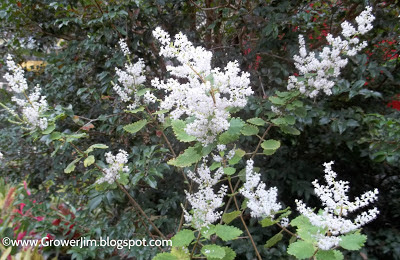 Great article. I am Zulu, my mom used to use the Iboza leaves to cure a cold or to alleviate flu-like symptoms or mild fever by boiling the leaves in water and straining. She would drink the hot water like tea :-)

Good to know! I'll have to try that!

I just drank half a glass of concentrated iboza after a full glass of it diluted. I had a very bad cough and severely sore throat. My ears were on fire and my throat too but now it feels like I was never sick. Its the only natural remedy I know which combats sores and infections inside the body almost immediately, trust me, u'll never go wrong with it. I use it on my 4 year old son too. :)

Grower Jim, I live in SD and our relatively dry and warm climate sounds great for this plant. Do you know of any sources of it? Thanks
SMJ

Steven, I don't know of a specific source for this species. Your best bet may be to check with specialty herb growers in your area. Most of the cultivated forms are males because they have the more attractive flower spikes so seed is also difficult to find outside its native region.
Good luck!

I fully also have testimony from the use of Iboza at a very young age. We had a tree planted outside our house and we always knew that whenever a flu bug comes knocking, thats where we would go first for some healing

We have a single plant, in a pot which I plan on bringing inside for the winter - but I thought I'd let it get some frost first to see if it flowers. We've had 3 consecutive frost nights, but no flowers yet. Is it too soon? I'm worried that the leaves will die. If it's not flowering, is that an indication that we have a female rather than male plant? Thanks!

Colin, there are many years that we don't get any frost here, yet Tetradenia blooms every year. I believe the flowering is triggered more by daylength than temperature. If you have a spot where it would be protected from frost, but still get no artificial light at night, that would be ideal.