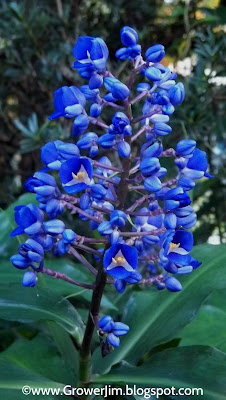 Although Dichorisandra thyrsiflora is commonly referred to as blue ginger, it is not a ginger and is actually more closely related to our native spiderwort. The growth habit of the plant certainly resembles many of the costus gingers, but a careful examination of the flowers reveals a likeness to its relatives in the Commelinaceae family.
The erect canes grow new from soil level each spring, eventually reaching a height of 3-4 feet in sunny areas and up to 6 feet in shady locations. From late summer through mid-fall, these fresh canes are topped with clusters of brilliant blue 3-petaled flowers. Canes from the previous year's growth may branch from the nodes and support multiple flower spikes.

The plant grows in full shade to mostly sun, but the foliage looks best where it gets at least some protection from the intense summer sun. They thrive in moist environments, but once established, they are very drought tolerant and able to survive extended periods without rain.

They multiply slowly so it takes a long time to establish a clump, unless you take stem cuttings. Roots and a new plant are able to form at each node along the stem. On their own, the plants spread by an underground rhizome. Rhizomes are thick and clearly segmented between canes. In addition, there are golf-ball sized storage roots growing deeper in the soil than the rhizomes. 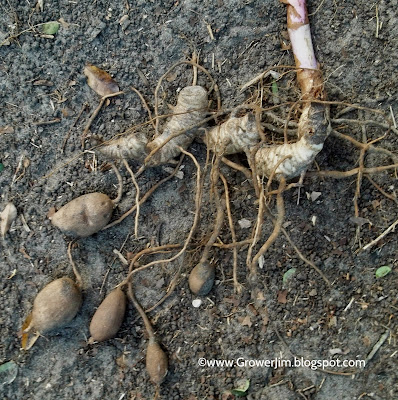 Dichorisandra thyrsiflora is native to tropical parts of America, especially Brazil. It is recommended for USDA Zones 9-11, but reportedly survives Zone 8 conditions as a true perennial, dying back each winter and resuming growth in the spring. 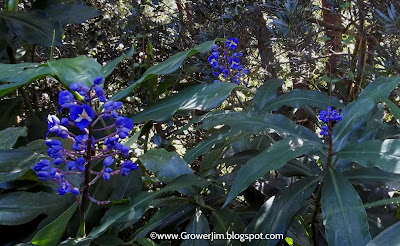