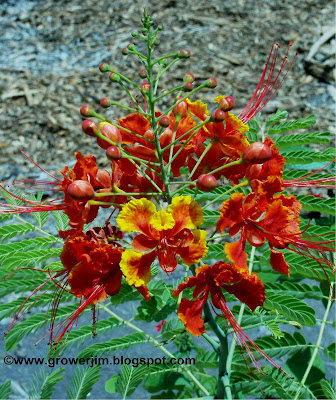 Caesalpinia pulcherrima (sez-al-PIN-ee-uh  pul-KAIR-ih-muh) is a highly attractive shrub or small tree that blooms throughout the summer and fall (June through December).  It is also known as Peacock Flower or Pride of Barbados.  It is sometimes known as Dwarf Poinciana, but that is a poor choice for a common name because this plant is not a Poinciana!  There are over 70 species of Caesalpinia and at one time they were all lumped into the Poinciana genus, but that is no longer the case.


Large clusters of flowers appear on the tips of every branch, putting on a spectacular show.  The individual flowers open with a bright yellow edge which turns orange by the second day, to match the rest of the flower.  Long stamens jut out in a graceful curve from the center of the bloom.  As the individual flowers age, they turn a reddish-orange before shriveling and falling off the plant.  Each flower is about 1.5 inches in diameter and the stamens are 2 inches long. 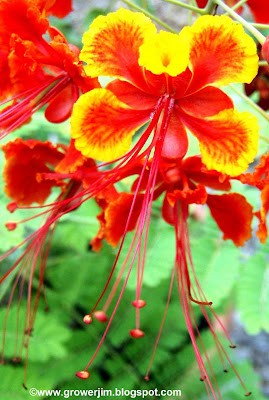 There is also a yellow-flowered form that is less common.

This plant is attractive to several types of butterflies, including Swallowtails, Fritillaries, and Sulphurs. Hummingbirds also visit the flowers. If pollinated, a flat 3 inch long pod will develop.  Although it's a legume, its nitrogen-fixing abilities appear limited, and root nodules seldom form.

This Caesalpinia grows to around 8-10 feet tall.  The 1.5 foot long leaves are bipinnately-compound so the foliage has a very delicate, ferny texture. 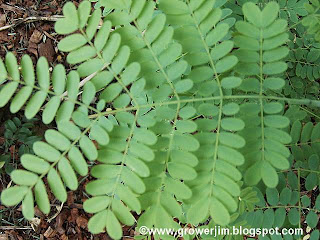 The stems have thorns similar to a rose. 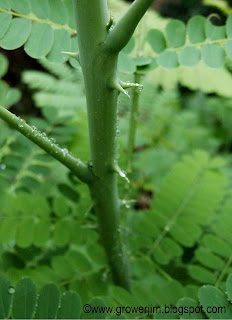 It can freeze to the ground when temperatures reach the upper 20°F range, but will usually grow back quickly in the spring.  It is recommended for USDA Zones 8-11.  In colder parts of its range, it behaves almost like a perennial, regenerating from the base each year.  In warmer spots, it can be trained into a small tree form.
Caesalpinia pulcherrima is believed to be native to the West Indies and tropical America, but it has become established in tropical regions around the world.  It blooms best in full sun, and is drought-tolerant once established.
Posted by Grower Jim

This shrub is still known here as the Dwarf Poinciana ... and it was once a fairly common sight in most gardens. Nowadays it's considered a bit old-fashioned ... it's still a beauty though.

One of my neighbours has a huge one just outside their fence and it puts on a fabulous display. I just loved your close-up of the lovely flowers.

Love the flowers. These are really common here. Never knew it was a poinciana though.

Jim,
Try googling 'Ohai Alii' to see the beautiful lei that can be sewn with these flowers.
You pack a lot of variety into your acre!

These are on my wish list
Do you have the yellow form also?

Gardens in the Sand, I don't have the yellow form of this species, but I have the yellow C. mexicana which is a hardier plant. I used to have a pink one, but it wasn't too vigorous and eventually disappeared.