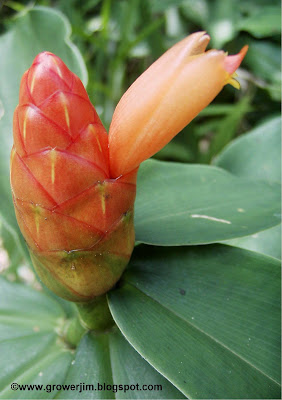 Costus scaber is often sold under the name C. spicata, but that is a different plant that is not commonly cultivated here.  This is one of the "spiral gingers", so-named because of the way the leaves spiral around the stem of the plant as it grows.  The amount of spiral varies from stem to stem, in some cases being barely perceptible. 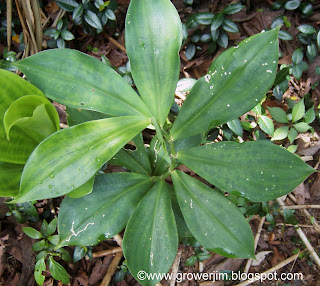 This species is also sometimes known as Indianhead ginger.
An orange "cone" structure forms when the stalks reach their maximum height of around 4 to 6 feet.  Orange, tubular flowers emerge one or two at a time from within the bracts of the cone, one flower per bract.  Each flower lasts one day. 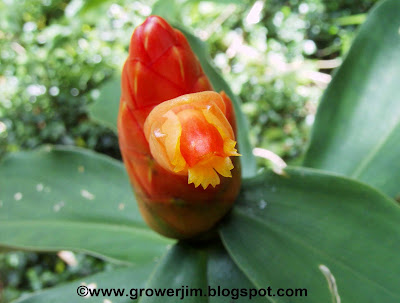 Ants will sometimes be seen feeding on the sugary nectar that oozes from the bracts.  The orange cone will continue to elongate throughout the summer, eventually reaching 6-8 inches in length. 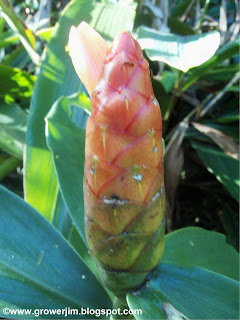 By late fall, the bracts start to separate and dry up.  At the same time, new little plantlets will start to grow on the stem of the plant, just below the flower structure.  As the spent stems decline, they'll fall to the ground where the small plants will take root and grow.
Costus scaber will bloom best in full to filtered sun.  The flowers have no fragrance, but are edible.  They have a pleasant flavor, a crunchy texture, and are juicy when you bite into them.  They're perfect for adding to fruit salads. 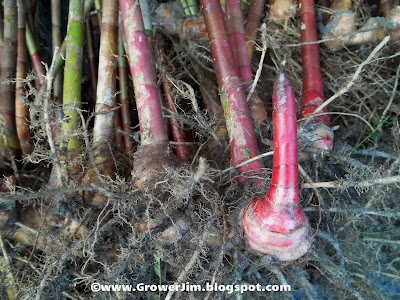 The rhizomes are thick with closely-spaced canes. They are not considered edible. 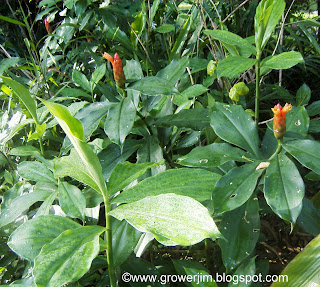 Costus scaber is normally evergreen, but even if frozen to the ground in winter, it will come back and be in bloom by early summer.  They can be grown in the ground in Zone 8 and higher.
The bract structure of this Costus also makes a long-lasting cut flower.
Buy Costus scaber!
Posted by Grower Jim

I think I may have this spiral ginger. It joined my garden last summer but hasn't bloomed for me yet. When it does I will have to come back to this post to compare. I also have Costus Barbatus (sp?) which is usually blooming from 6 or 8 stems by now. This year something ate each litte sprout as it came up this spring except for one. That one hasn't bloomed yet. I love gingers and the fact that all mine have come back after this crazy cold winter makes me love them even more.

NanaK: Stay tuned... I'm planning a whole series on spiral gingers! The squirrels are the culprits that eat the new ginger shoots in my garden. I never had a problem with them until last year and they're back at it again this year.

Hi Jim,
I started one from a piece I nicked from a friends garden and it has grown well but never flowered. Mine is about 6ft high and I have seen another one I like better that is only about 2ft high.

Hi Jim,
I have the same plant. It is very hardy and flowers the whole year round. I just cut away the older stems a while ago.

After reading this post, I honestly think that you have the precise knoeledge of what are you talking about.I really want to applaud you for your passion towards your work that has made you stand today at this stage.Genuinely,there has not been even a time that I have visited your post and went without acquiring some good information.Keep it up.And yes i have book mark your site growerjim.blogspot.com .