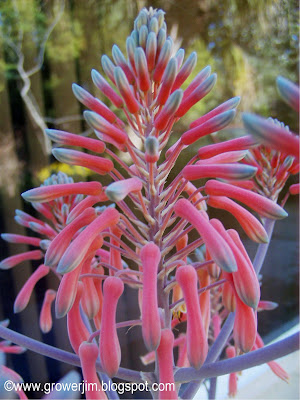 Aloe zebrina is just one of the many species of spotted aloes. It is very similar in appearance to Aloe saponaria, with which it is often confused. The main difference is that the spots on the leaves in this species tend to be in rows. The pattern of spotting is variable, even on a single plant. 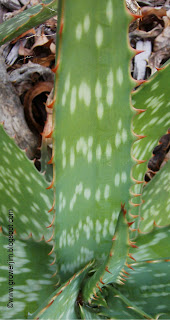 The plant grows to be fairly large, getting up to 2 1/2 feet across. Flowering occurs repeatedly during the year at any season. An established planting consisting of several plants will be in bloom nearly every day during the warm months of the year.
The flower spike emerges from between the leaves and grows up to three feet in height, branching near the top. The reddish tubular flowers barely open at the tip.

Even when not in bloom, the rosette of spotted leaves makes Aloe zebrina an attractive specimen in the landscape. 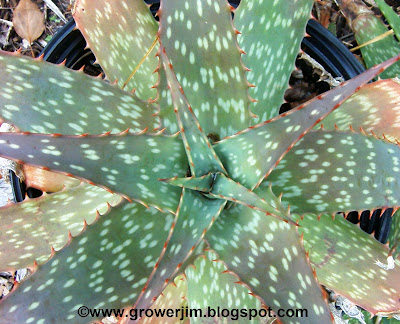 This native of southern Africa grows in a wide range of conditions in its natural habitat and there is considerable variation within the species. It is recommended for USDA Zones 9b to 11. The roots are a source of golden-yellow dye.

Hummingbirds love the flowers of Aloe zebrina and will make repeated visits to the blooms throughout the day.
Posted by Grower Jim

Email ThisBlogThis!Share to TwitterShare to FacebookShare to Pinterest
Labels: cacti and succulents, hummingbirds

Beautiful aloe, Jim! I like your description of this variety, too. Mine just finished blooming, but I don't think it's the same as yours as the blooms are a bit different..mine has some orange at the ends. I'll have to look. at the spots. Interesting that your kind has spots that line up..awesome fact!