Cattley Guava (Psidium cattleianum) is a very reliable summer fruit for subtropical areas.  It is native to Brazil and will thrive wherever citrus is grown. 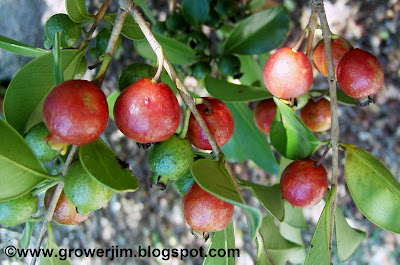 There are two main types.  The red-fruited variety is known as the Strawberry Guava, and the yellow-fruited one is known as the Lemon Guava (var. lucidum).  Sometimes the yellow variety is listed as a separate species (Psidium littorale).
The red fruits have a stronger flavor and are slightly smaller in size than the yellow fruits.  The interior flesh of the fruit is white or cream-colored in both varieties.  Both types lack the muskiness of the tropical Guava.  The red-fruited type is considered to be the more cold-hardy of the two.  Both are more cold-hardy than the Tropical Guava.
This year, because of the severe drought, the fruits are much smaller than normal, and not as juicy. 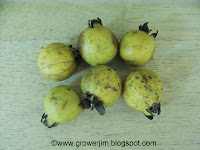 Cattley Guava grows as a large shrub or small tree, usually reaching 12-15 foot in height.  They can be kept pruned to a much smaller size, if desired, and will even fruit well in containers. 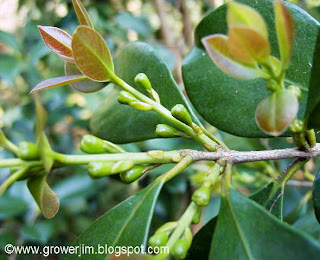 In late winter to early spring, highly fragrant white flowers appear on the new growth.  The fragrance carries on light breezes, and will perfume your entire garden. 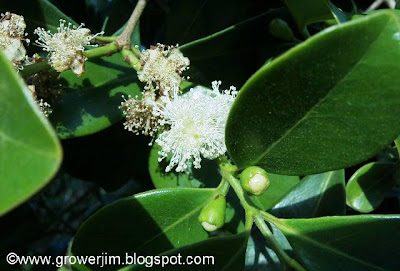 Psidium cattleianum fruits ripen in mid-summer.    They can be eaten fresh, used to flavor drinks and ice cream, or made into jams and jellies.  Like the Tropical Guava, the flower calyx persists on the ripe fruit, and there are many small hard seeds inside that can be easily swallowed.  Cattley Guavas are susceptible to the same fruit flies as the Tropical Guava and can be controlled by bagging the clusters of fruit.
The leaves are an attractive, dark, glossy green.  They are often used as an ornamental hedge and will still produce fruit.  Older trees have a smooth, flaking bark.  Mature trees will tolerate temperatures in the low to mid twenties F. 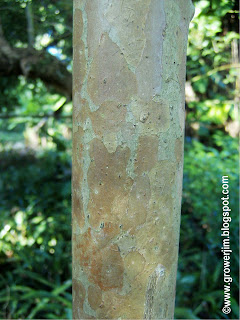 Because of the large amounts of fruit and seed produced, Cattley Guavas are considered invasive in some tropical areas. 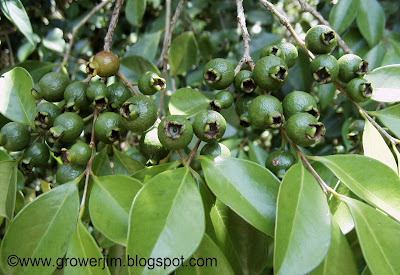 On my little plot of land in Central Florida, I've never found any volunteer seedlings in over 20 years of cultivation.
Posted by Grower Jim

Wow!! I have never had strawberry guava. Sounds delicious!

If you have any of these to sell at the bromeliad show consider it sold!

It might be because of the controversial "invasive" nature, but I have never seen this one for sale anywhere. I've heard from others that its not invasive in central Florida too... maybe the seedlings are tender.

Thanks for this post! I will forward a link to my friend who had this tree in her yard. She let me take a lots of strawberry guava home last weekend. I love the taste of this fruit!

I am intrigued...and will check this out. Citrus grows in Tucson...and I know Guava may do the same....sounds like it would be worth a try:) Thank you for sharing.