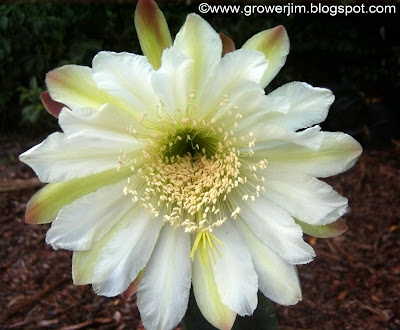 Cereus peruvianus is a tall columnar cactus native to South America.  The species name, peruvianus indicates it is a native of Peru, but this was a horticultural error.  It is actually native to Brazil, Uruguay, and Argentina.  Up until the 1920s, nearly every columnar cactus discovered was given the name Cereus.  Eventually they were split into several different genera but many still retain Cereus as part of their name, leading to much taxonomic confusion.
The columns often have a gray-green or bluish tint in full sun.  There seems to be some genetic variation in coloring, and color is more pronounced on new growth. 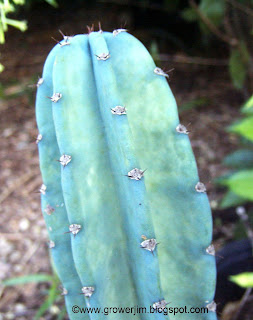 With age, they begin to branch and can form some spectacular specimens up to 20 feet tall.  They are very easy to grow and are now planted worldwide.
During the warm months of the year, large, 8-inch diameter, greenish-white flowers will open at night.  They have a delicate fragrance, and pollinated flowers will develop an edible fruit that turns pink or red when ripe. 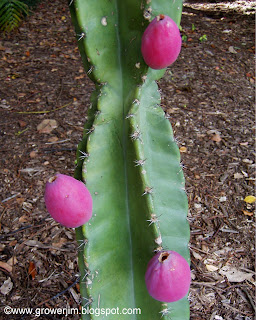 Less common strains have yellow skin.  The ripe fruit ranges from the size of a large hen's egg to tennis ball size.  Inside, it has white flesh with black crunchy seeds. 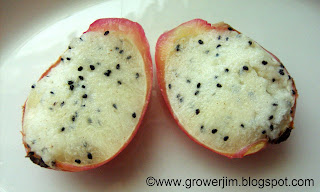 The flesh has a granular texture that quickly turns mucilaginous when spooned or pressed.  The white flesh can be spooned out of the rind or the fruit can be sectioned and eaten in chunks.  Cereus peruvianus fruit has a delicate floral flavor very much reminiscent of the flower's fragrance.  The fruit of the Cereus and several other species of cactus is known as Pitaya.  It is being grown commercially in the deserts of Israel and is marketed as Koubo to distinguish it from other Pitayas.
Some Cereus are self-infertile, so if you're growing these for the fruit, try to obtain more than one genetic strain for cross-pollination.
This plant is sometimes also called Peruvian Apple or Night Blooming Cereus.  They grow well in containers and will flower and produce fruit if given adequate light. 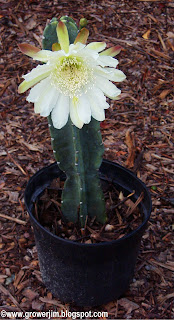 Full sun is best for flower and fruit production, but the plants will grow quite well in shade or even as houseplants.  Cereus is recommended for USDA Zones 9-11.  This would make it hardy to about 20°F.
Posted by Grower Jim

This is one of my favorite plants here. I have to be careful because I have been planting them all over the property....the flowers are great, the plant is attractive, it can take shade or sun....not intense sun in the beginning, it produces fruit...I break an arm off and let it dry for a week and then stick it in the soil and wow!! Watch it grow...it can take water or not as much water here....fantastic plant to have on the grounds!

Thanks for the share. I'll definitly consider planting this sometime soon.

Hi Jim,
This looks very much like my dragon fruit flower.

Hi Jim
I just purchased a Cereus Peruvianus. I has 2 flower buds on the plant. Can you recommend a good soil mix and fertilizer that would promote the growth of a healthy plant. I have dragon fruit growing in my yard also and I must agree with one the flower and fruit look almost identical to my dragon fruit plants.

Anonymous,
Any soil that drains quickly will be good. Adding course sand or perlite to most soils will help. I don't ever fertilize mine. Their nutrient requirements seem to be very low.

Hello, I'm from Portugal. Anyone can please inform where can I buy some CEREUS PERUVIANUS cuttings to make some growing trials here in Portugal?