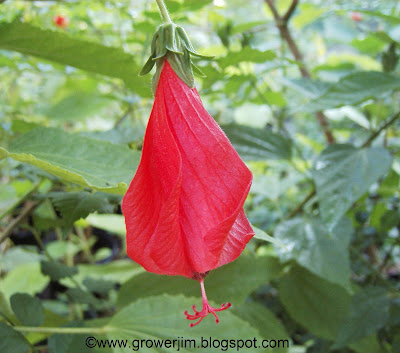 Malvaviscus arboreus var. mexicanus is a fall and winter-blooming relative of Hibiscus.  The bright red flowers are pendulous and last for several days.  The petals do not flare back like Hibiscus, but remain swirled around the pistil.  This gives the impression that the flowers never open, and hence the common name of Sleeping Hibiscus.  It is also sometimes known as Turk's Cap or Lipstick Hibiscus.  There is a pale pink color-form that is not as showy. 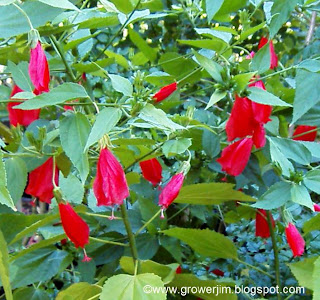 Malvaviscus arboreus is a large woody shrub growing to eight foot tall by six foot wide.  It is native to Mexico and is recommended for USDA Zones 9-12.  It flowers best in full sun, but will grow quite well in shady areas.  It is drought-tolerant once established.

There is a nectary at the base of the flower and you can taste the sweetness by plucking off the bloom and sucking on the end of it. The petals themselves are also edible, but lacking in flavor. 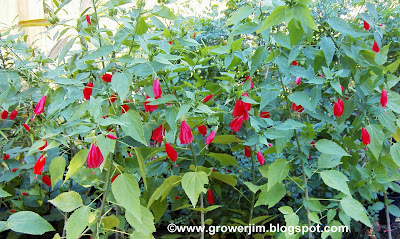 There are two distinct varieties and many online resources confuse the two.  Variety mexicanus is the one pictured and described here, and is the one most commonly grown in Florida.  Variety drummondii (most commonly grown in Texas) apparently has broader fuzzy leaves, more erect flowers, red fruits, enjoys moist, part-shade conditions, can become almost vine-like, blooms in summer, and is apparently more cold-hardy.  One online nursery is growing them as a perennial in Zone 6B!
It's strange that these two plants are classified as varieties and not separate species, given their completely different habitats and form.  If you're shopping for this plant, make sure you know which one you're getting!
Posted by Grower Jim

Email ThisBlogThis!Share to TwitterShare to FacebookShare to Pinterest
Labels: shrubs

I used to see this hibiscus in my kampung (village) but nowadays cant find them around, almost extinct. But I didnt know that its called sleeping hibiscus..

Hello Jim, exactly this one is growing here as a perennial and flowers all year round. It's been grown as hedge of our property since i was a kid but was killed when i was already in college. However, there are still some of them which has become wild when left by owners. We call H.rosa-sinensis as gumamela, and we call this one also as gumamela, even if it's of different genus. I wonder why it only blooms in fall in winter there, when it blooms all year here! I miss this one, this post reminds me to plant it again as a reminder of childhood.

We find H. drummondii in Charleston gardens but have not seen H. mexicanus. Will have to search this one out and try it here. Certainly think we should be able to have success with it in our climate.

I love hibiscus, I have one in my garden and bloom for few days, but it is always nice to look at it.

I love its colour, bright red.

IF YOU CUT THESE BACK WILL THEY BUSH OUT?

Jeff, just like any shrub, the more you cut, the bushier they get!