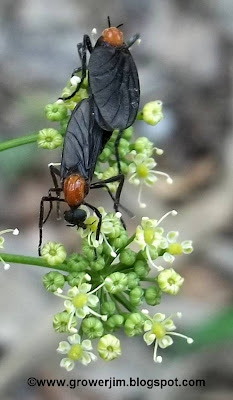 In spring and fall, Lovebugs fill the air (and cover windshields) throughout the southeastern United States. They get their common name from the fact that you almost always see them joined together in an act of passion, even while flying!
Lovebugs (Plecia nearctica) are actually a type of fly with a red thorax. Males are 1/4 inch in length and females are 1/3 inch.
Sex seems to be more important to them than food, and you rarely see them feeding on anything. This year, however, I did discover that they are attracted to the flowers of parsley. Swarms of them have descended on my flowering parsley patch to partake of the nectar therein. This makes them much easier to photograph than trying to catch them in mid-flight. At night, they never leave the plant, choosing to sleep on the underside of the parsley umbels, still joined together.
Lovebugs are so numerous in this part of the country that one would think they are native here. However, according to the University of Florida, lovebugs were only seen in Southern Louisiana in the 1920s. They were not reported in Florida until they were spotted in the panhandle in 1947. By 1974 they had made their way another 500 miles to the southern end of the state, and as far north as South Carolina. 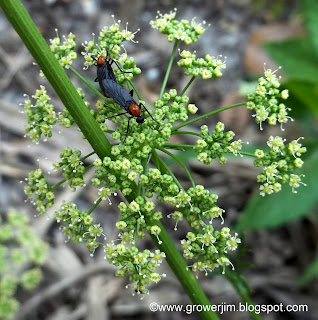 There are two major flights of lovebugs during the year, spring and fall. The flights extend over a period of 4 to 5 weeks, but individual females only live 2-3 days. During their brief life, females lay from 100 to 350 eggs in decaying vegetation. The larvae feed on this until they pupate, a stage which lasts 7 to 10 days. The adults then emerge to repeat the process all over again.
Driving during lovebug season can be hazardous. Their smeared bodies on the windshield will reduce visibility, and permanently damage the finish on painted areas of automobiles. Large swarms can clog radiators and cause engine overheating.


The First Friday Creature Feature is hosted right here on the first Friday of every month.  You're invited to join in!  Here's how:
1. Write a post featuring some creature that lives in your garden.
2. Within your post, include a link to my Creature Feature post so your readers will know where to find the creatures.
3. Add your link below and leave a comment.
Thanks for participating and please join in again next month!

I think this year has been one of the worst "love bug seasons" that I have seen. Really glad it is slowing down. They are real pests while working in the garden. I was spending half my time swatting at them.