Commonly known as Rattlesnake weed or Florida Betony, or properly known as Stachys floridana.  This is one weed that has some benefits-- you can eat the roots!  It grows about a foot tall and has white to pink flowers with purple markings.  The stems are square, as is typical of members of the mint family. 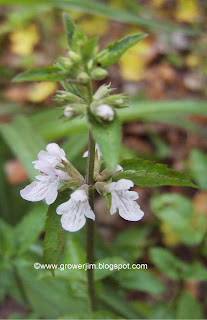 It was thought to occur only in Florida until the 1950's and was then spread by humans through the movement of turf and ornamental plants.  Even a tiny piece of the white root can start an entire new plant.  This weed is now common throughout the Southeastern U.S. and parts of California.  It is capable of producing seed but virtually all reproduction is by the tubers and root sections. 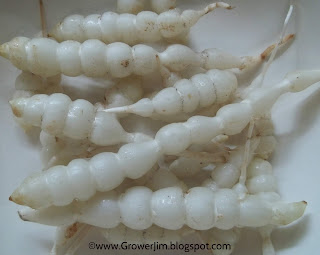 The tubers are the desirable, edible part of the plant and somewhat resemble the tail of a rattlesnake.  They are firm and white and are normally 3-4 inches long.  The tubers can be eaten raw or cooked and require no peeling.  Simply wash them off.  Raw, they are crisp and crunchy, similar to a very mild radish.  Cooked, they add a peppery flavor to whatever they are combined with.  They are often added to soups and retain their crunchy texture even when cooked.
The leafy parts of the plant can be made into a tea or steamed for a nutritious green. The flavor of the cooked leaves is not that great so you'll probably want to mix it with other greens.

There is a closely related plant (S. affinis) known as Crosnes or Chinese artichokes.  Many botanists contend they are the same plant, but in organic and gourmet markets in New York, Crosnes sells for up to $5 per tuber-- the equivalent of $150 per pound!!  They are served in some of the finest restaurants and priced accordingly. 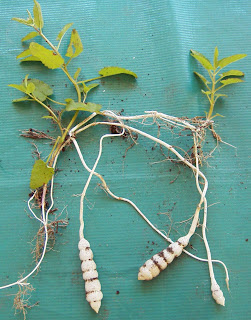 Just think... those weeds in the back yard could be your next gourmet meal!  Don't plant them on purpose though--they are invasive.  Even if you harvest them regularly you won't get rid of them.  The thin roots break off easily and any piece remaining in the soil will grow a new plant.  I've been eating these for years and the number of them growing in my yard has not diminished in the least!

Very interesting and informative. I think I need to go check out my weeds. I have quite a variety so feel pretty sure I must have this one.

I don't think I've seen this plant up here, but I'll keep an eye out for it. If I find it, I'll be sure to eat it. Thanks for the tip!

How interesting, Jim! I never knew. I have to check out my weed stock...I have a lot of it!!

Sounds yummy! Unfortunately, I have not seen this weed here. Though I'm pretty sure I have EVERYTHING else!

Susan in the Pink Hat said...

Can I have it in a brownie?

I have rattlesnake covering about an acre in my yard. I was in the landscape business for 15 years and it was a problem in many yards, and very hard to get out. I knew you could eat it but had never tried it before today. I think now that I've tried it, I will just see if I can eat it out of my yard. Try it! Like it best fried with a small amount of olive oil. Raw, steamed, or mix with other food yum yum.

I have salvia on the my property but I am not sure if it is the same one.

I have it and want to get rid of it! I might eat some but it has invaded my garden and need suggestions to get it out/kill it. I'm open to digging the whole bed and starting over but worried it may come back anyway. None of our neighbors have it and we think it came in some shared transplants from family in MS (we leave in SC). HELP!

David, you will have to dig out the whole bed (maybe several times to get rid of it. Even then...
It only takes one tiny bit of white root to get started again!
You may just have to learn to live with it.

I'm from MS and this is everywhere in my yard. Never knew it was edible though!

Now that you know it's edible, maybe it will be easier to keep it under control. Whenever you're hungry just go out and pull some up. It should be under control in no time!

This weed has and still is invading my 30x10 flower garden. Now I know why it keeps coming back!This is the first site that I have found images just like my weeds. Thank you forthe information....although frustrating as it is. Is there any chemical that would kill it and not my surrounding plants? I live in southeastern North Carolina.

Donna, anything that kills this will kill anything else you've got growing. Sounds like you just need to eat the weeds faster!